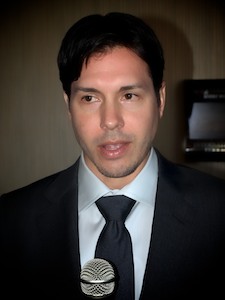 From the archives of Hispanic Lifestyle we feature Jon Seda. We spoke with actor about his Imagen Foundation nomination, the entertainment industry and his future plans. The latest is that Jon is portraying Detective Antonio Dawson on the hit NBC television Chicago PD.

Bio from the web.
Jonathan Seda (born October 14, 1970) is an American actor, possibly best known for his role as Detective Paul Falsone on NBC‘s Homicide: Life on the Street.

Seda was an amateur boxer who, in 1992, auditioned for and was given a role in the boxing film Gladiator. He portrayed Chris Pérez alongside Jennifer Lopez inSelena and became widely known to both the Hispanic and non-Hispanic communities. He has made numerous television appearances, and appeared as legendaryMarine John Basilone in Tom Hanks and Steven Spielberg‘s follow up to Band of Brothers, The Pacific.