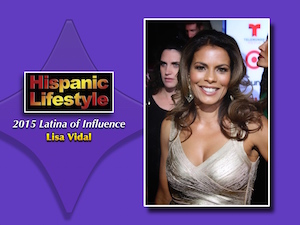 Award winning actress Lisa Vidal, is no new comer to the challenging multi-layered roles she’s been so successfully portraying. She is most recognized for the regular roles she’s played on popular hit primetime series such as Boston Legal, CSI Miami, The Division, ER, Third Watch and Southland. Vidal can currently be seen starring opposite Gabrielle Union on the hit BET series “Being Mary Jane,” which just began it’s second season.

She then went on to play the charming housekeeper for a good-natured elderly heiress (Loretta Young) in the NBC holiday TV-movie tearjerker “Christmas Eve“. The busy actress continued on such wildly popular series as “The Cosby Show” and “Miami Vice” (both NBC). Determined to take roles that reflected the diversity of the Latino community while at the same time building it up, Vidal acted in the two “ABC After school Special” educational presentations “Class Act: A Teacher’s Story” and “In the Shadow of Love: A Teen AIDS Story”

Though television would remain her primary medium, Vidal also starred in feature films such as “Night and the City” and a significant supporting role in the engaging slice-of-life comedy-drama “I Like It Like That.”

Vidal was most recently seen in the feature film “Dark Mirror” a suspense thriller where she plays the lead the role of photographer Deborah Martin. “Dark Mirror”   was released May 6th through “On Demand” by the IFC Channel as part of “IFC in Theatres. Variety said of her performance,  “Pablo Proenza’s debut feature “Dark Mirror” about a haunted house — or a woman’s madness, or both — sustains suspense throughout, thanks in part to a tour-de-force perf of Lisa Vidal as the eye of the spectral storm.”

Vidal’s exceptionally powerful performances and ability to portray both hard and soft in turn without either side being shorted with two-dimensional treatment continues to make her one to watch.