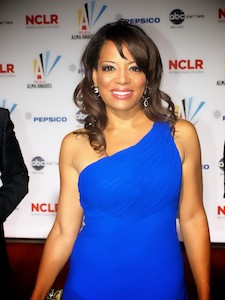 From the files of Hispanic Lifestyle is our interview with actress Lauren Vélez.  The interview took place on the red carpet of the Alma Awards.  In this segment Ms.Vélez talks about acting and the image of Latinos in the entertainment industry.

From IMDb
Born in Brooklyn and raised in Queens, New York among eight siblings including her twin sister Lorraine, Lauren Velez dreamed of becoming an actress ever since she played a groundhog in a school play in second grade. Immediately following high school, she received a scholarship from the Alvin Ailey Dance School which led to her first job performing in the national touring company of the musical “Dreamgirls”. Later she became understudy for actress Phylicia Rashad in Broadway’s “Into the Woods”. Her most visible role was that of “Nina Moreno” on the cop drama New York Undercover (1994). With her varied performances and Afro-Latin background and appearance, Velez’s success is considered — by fans and critics alike — a breakthrough for Latina actresses who do not fit the stereotypical “Europeanized Hollywood” version of Latin females. As a result, Velez deservedly has a large multi-ethnic following.