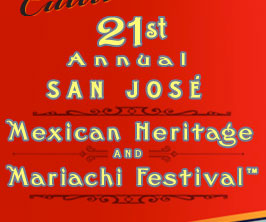 The 21st Annual San José Mexican Heritage and Mariachi Festival announced the return for the third time in as many years of acclaimed theatrical director Dan Guerrero to the festival concert stage.

“We’re delighted to welcome Dan back to lead us to the promised land of entertainment bliss,” stated Marcela Davison Aviles, VivaFest Executive Producer. “Dan’s creativity and sense of humor makes everything magical, on time, and under budget.  He’s adored by artists and producers alike, a real Mexican mensch.

“It is an honor once again to produce an amazing show for VivaFest!,” said Dan Guerrero, Creative Director of the San Jose Mariachi and Mexican Heritage Festival. “This year’s ‘Domingo Gigante–A Night of Stars’ will continue our commitment to create an exciting and innovative music event to celebrate the best of Mexican music and culture.”

The 2012 ¡VivaFest! season continues in September with a full schedule of cultural events and activities, including a showcase of Latino independent films, concerts, music and dance workshops, themed dinners and visual arts activities. The popular and award winning festival is one of the largest in the state, drawing thousands to the Silicon Valley to celebrate and be inspired by California’s Mexican heritage.