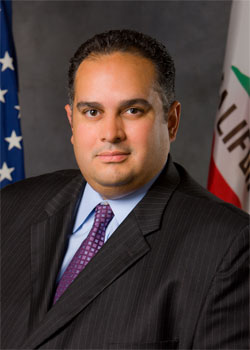 Today Speaker John A. Pérez (D-Los Angeles) assumed the role of President of the National Speakers Conference (NSC) in recognition of his leadership of the California State Assembly. Elected on Sunday, Pérez will serve the customary one-year term as President of the NSC.

“I am deeply honored at having been elected President of the National Speakers Conference, and am very much looking forward to working with my colleagues across the country in this new position,” Pérez said. “As Speakers, each of us is privileged to serve the people of our states, and each of us has the opportunity to work with the members of our respective Legislatures to put forward policies addressing the crucial challenges facing our country, especially on job creation and renewing opportunities for middle class families, and it’s an honor to be able to serve in a position that will allow me to work with other Speakers on those critical issues.”

Speaker Pérez is the first Californian to serve as President of the NSC. He is also the first openly gay person to be elected to the position of Assembly Speaker in the country, and has been a longtime advocate on behalf of the LGBT Community.

Since being elected as California’s Speaker in 2010, Pérez has fought to protect and create jobs while reducing the Assembly operating budget every year in order to direct the savings towards programs in need, most recently for veterans and to re-establish the California Commission on the Status of Women.