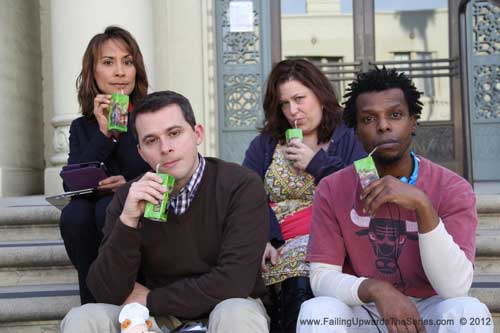 The sexy ALMA Award Winning Latina Actress, Michelle C. Bonilla (The Closer, Slip Away, ER) and Matt Crabtree (NCIS) under the marquee of MCBMC Productions, present “Failing Upwards” – a brand new feel good comedy web series, premiering September 3, about unemployment and the hilarity of finding a job…even if you have to lie to get one.

While popular shows such as “Keeping up with The Kardashians” and “The Real Housewives” franchise deal with obnoxiously wealthy people with little to no talent, with enormous budgets dedicated to lucrative shopping sprees, the current trend seems to be moving towards a new breed of shows based around the flat-broke truth of a country that is dealing with hard economic times. Mostly delivered in the “reality TV” format, these shows run the gamut of (financial) survival in today’s economic climate marked with a record high 8.2 unemployment rate.

When it’s an election year and the country’s unemployment figures remain an issue, It’s no surprise we not only hear a lot about jobs, but also seeing the topic emerge on our small screens. From shows such as A&E’s the “Job Whisperer”, Sundance Channel’s “Get to work”, to MTV’s upcoming new series “Unemployed” about the millenial generation’s job seeking experience, unemployment is THE hot topic du jour and will get more momentum and heat – being the current # 1 focus of the presidential campaign – as the media goes full steam (coverage wise) into these 2012 elections.

While all these shows focus on pragmatic tools, teaching us about clipping coupons, storage-locker auctions, furniture restoration, flipping houses, or even about getting back to work during these hard economic times, there is one unique show that offers a more practical approach: laughter!

“We want to provide a respite for working individuals everywhere. We know how difficult it is to get a job and this can really dampen someone’s spirit. It’s our goal to be able to  provide some levity to all those job seekers who ‘pound the pavement’ every day, make them laugh, and inspire them to continue on their searches,” says Michelle Bonilla.

“Failing Upwards” is not just another comedy web series but a timely social series that creates comedy out of heart break, provides a chuckle to those who “pound the pavement” every single day, and also gives back to the job seeking community by supplying online viewers with links to job source sites, discounts, tips, and relevant news topics of the day.

Failing Upwards invites you to follow a group of four, culturally and socially diverse, “thirty-something” friends, as they find themselves going through the ups and downs of unemployment, TOGETHER! Each of the characters, inept, in their own special way, end up surprising themselves, each other, and the audience with their “not so perfect” ability to get the job done…WHATEVER it may be!

Failing Upwards stars writer/creators Michelle C. Bonilla (Celena) and Matt Crabtree (Charlie). Rounding out the cast are writers Deidra Edwards (Annabelle) and Pip Lilly (Pip). The guest cast includes Thea Gill, Stephanie Erb, and Gerald McCullouch.
Season one consists of 6 episodes, 5 – 7 minutes each, and will air every two weeks, to coincide with the due date of most unemployment forms, starting Monday, September 3, 2012 on The Failing Upwards YouTube Channel and their Official Website.

Take a break from ‘pounding the pavement’, raise your spirits, and start Failing Upwards on Labor Day 2012. Unemployment has its perks.