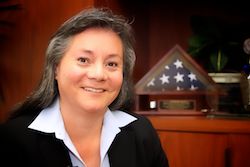 Responsible for community and government relations at the municipal and county levels is vice president of Local Public Affairs for Southern California Edison Veronica Gutierrez one of Hispanic Lifestyle’s 2013 Latinas of Influence.

Veronica Gutierrez is vice president of Local Public Affairs for Southern California Edison (SCE), responsible for community and government relations at the municipal and county levels, and also for licensing for SCE’s major transmission projects.

Prior to her current role, Gutierrez was vice president of Corporate Communications responsible for all SCE communications and the community involvement functions in the department. She was director of Public Affairs for Edison International (EIX), responsible for advancing initiatives and outreach efforts on the company’s behalf and focused on company efforts to positively influence global warming issues and advance new infrastructure development.

Gutierrez also served as director of Regulatory Compliance for SCE where her responsibilities included company efforts to comply with regulatory decisions, as well as compliance with affiliate transaction rules. She worked as a manager and lobbyist for SCE in San Francisco focusing on issues related to low-income customers, safety, customer service, and the environment, and in Washington, D.C. on matters related to California’s electricity crisis and EIX low-income housing and infrastructure investments.

Gutierrez earned a bachelor’s degree in psychology from Princeton University and a law degree from University of California at Berkeley Boalt Hall School of Law.