Event | “Literacy & Legacy, A Celebration of the Life and Work of Tomás Rivera” 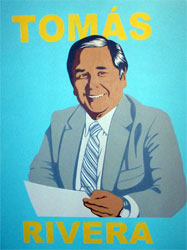 Award-winning artists Luis Alfaro, Josefina Lopez and Barbara Carrasco — two playwrights and a muralist who were inspired by Tomás Rivera — will lead the 25th anniversary conference honoring the legacy of the former UC Riverside chancellor  and Chicano poet on Friday, April 19.

The all-day annual conference — “Literacy & Legacy — A Celebration of the Life and Work of Tomás Rivera” —begins at 8:30 a.m. in the Highlander Union Building at UCR and includes afternoon workshops with prominent Latino artists, musicians, playwrights and screenwriters. It concludes in the evening at University Theatre with the staged reading of “And the Earth Did Not Devour Him,” Rivera’s classic novel adapted into a new play by Tiffany Ana López, professor of theater and the Tomás Rivera Chair in the College of Humanities, Arts and Social Sciences. The reading will be directed by award-winning filmmaker and theater director Juliette Carrillo.

Actor Alma Martinez, one of the original cast members of the Broadway play and film “Zoot Suit,” will join the post-play conversation with the audience. Her acting career spans 35 years in film, television and theater in the U.S., Mexico and Europe. She has premiered the work of playwrights JoAnne Akalaitis, Luis Alfaro, Cherrie Moraga, Arthur Giron and Milcha Sanchez Scott, and has been a guest artist at the Sundance Institute. Martinez is a longtime artistic associate of Luis Valdez and El Teatro Campesino and has appeared as the lead actress in most of Valdez’s most significant work.

Registration for the conference is required by April 12 and may be made online . The conference is free and open to the public. Parking costs $6 in Lot 30 and $8 in Lot 6 (pay by space). Permits may be purchased at the kiosk on West Campus Drive, near the campus entrance at University Avenue. Registration for Master Class Workshops is limited and priority will be given to those who preregister for all conference events.