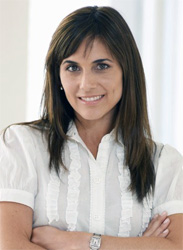 Vice President of Multicultural/Targeted Marketing for the National Basketball Association (NBA), Saskia Sorrosa is one of Hispanic Lifestyle’s 2013 Latinas of Influence.

As Vice President of Multicultural/Targeted Marketing for the NBA, Saskia Sorrosa is responsible for brand strategy, brand positioning, content development, event promotion and advertising efforts targeted to the U.S. Hispanic, African-American, Youth and Female segments.  In October 2009, Sorrosa successfully launched the NBA’s first-ever integrated marketing campaign targeted to the bicultural, bilingual Latino fan, know as éne•bé•a (the pronunciation of the NBA in Spanish); followed in December 2010 by the launch of the league’s youth platform, NBA Hoop Troop.

Sorrosa  previously  worked  out  of  the  Burso-Marsteller  New  York  office,  the  firm’s  global headquarters,  where  she  served  as  a  Senior  Associate  in  the  Brand  Marketing  and  U.S.  Hispanic Practices.  As  account  supervisor  she was  responsible  for  new  business  efforts,  managing  key client accounts,  developing  integrated communications  plans,  establishing  strong  client‐media relationships  and  implementing  media  relations  efforts  for  travel‐related,  financial  and consumer  brands.  In  addition  to  client‐related  work,  she  was  also  responsible  for  the development  and  implementation  of  a  global  marketing  plan  for  Burson‐Marsteller,  focusing  on building  the  agency’s  brand  reputation  and  increasing  brand  awareness  in  national  and international markets.

Sorrosa  first  joined  Burson‐Marsteller  in  July  1999  at  its  Latin  America  Headquarters  in  Miami, Florida  where  she  worked  for  three  years  prior  to  transferring  to  the  New  York  office.  During that time, she was responsible for supervising multinational accounts operating in  the  U.S.  and Latin  America,  exploring  new  business  opportunities  in  the  region,  as  well  as  managing  and coordinating  efforts  among  Burson‐Marsteller´s  regional  offices  for  the  execution  of  key  client accounts  and  new  business  presentations.  She  was  also  in  charge  of  re‐launching  the  Brand Marketing  practice  in  Latin  America,  for  which  she  prepared  new  capabilities  packages, collateral material, re‐launch letters and re‐launch presentations.

Since  she  first  joined  Burson‐Marsteller,  a  major  portion  of  Sorrosa’s  workload  has  consisted  of leading efforts for U.S., Latin American  and U.S. Hispanic clients in the technology, e‐commerce, banking,  tourism,  entertainment and  telecommunications  industries.  She has  successfully

Originally  from  Guayaquil,  Ecuador,  Sorrosa  holds  a  Bachelor  of  Arts  degree  in  Communications with a concentration in Marketing from George Washington University in Washington, D.C.

She now resides in New York City with her husband, Fernando, and newborn daughter, Isabella.