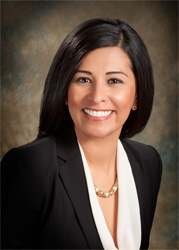 Born in Tulare County to Mexican immigrant parents, Connie Perez came from modest beginnings on a labor camp to become a successful executive and strong advocate for Latinos and Kern County.  Ms. Perez is a partner with Brown Armstrong Accountancy Corporation, one of the largest accounting firms in the State of California headquartered in Kern County.  She began her career with the firm as a staff accountant and rose through the ranks to become one of only two Latinas to make partner in the 38 year history of the firm.   She also serves on the American Institute of Certified Accountants (AICPA) National Commission on Diversity and Inclusion where she is focused on outreach and education to diverse communities on accounting careers.

Ms. Perez was also appointed as a Commissioner by Governor Edmund G. Brown to the State Lottery Commission. She is the designated representative for Central California and the only female and Latina commissioner.  Ms. Perez also serves as a Board Member and Treasurer on the California Hispanic Chambers of Commerce, representing the interests of businesses across the central region, a territory that goes from Yuba County south to Kern County.

Giving back and supporting her community has always been important to Ms. Perez.  She continues to be involved with several non-profits in the community.   She currently serves as a Board Member and Treasurer for the Latina Leaders of Kern County an organization focused on mentoring and advocating for Latinas.  Ms. Perez also serves as a Trustee for the Bakersfield Memorial Hospital Foundation.  She also serves as a Board Member and Treasurer for Children Joining Children for Success an organization focused on helping foster children in Kern County.  In 2012, Ms. Perez also co-founded the first Career Day at her former grammar school, Woodville Elementary School, where fourteen speakers shared their career story with the students who were predominately living on the nearby labor camp where she was also raised.  Ms. Perez also serves on the board of the Make-A-Wish Foundation of Greater Los Angeles where she is helping to grant wishes to children suffering from life threatening illnesses with a specific focus on wishes for children with Spanish language needs.

Ms. Perez has a passion for international travel, having visited Argentina, Brazil, Germany, Italy, London, Mexico, the Netherlands, Spain, and Switzerland. In her free time she enjoys running and hiking. She recently hiked Half Dome and Mt. Baldy.

Ms. Perez often visits her mother and father, who still reside in Porterville, and her nephew Fernando who attends Foothill High School. She also has a sister who lives in the Bay Area and works for AmeriCorps.

The full State Senate is scheduled to vote on Perez’s appointment in March. Perez was chosen for the position by Gov. Jerry Brown.

“We congratulate Connie Perez on the support she received from the Rules Committee,” said Mark Martinez, CEO and President of the California Hispanic Chambers of Commerce. “She is a natural leader who will bring an abundance of knowledge and expertise to the Commission.”

Connie Perez is a partner with Brown Armstrong Accountancy Corporation, one of the largest accounting firms in the state of California, where she helps lead the Southern California office headquartered in Pasadena. Perez graduated from California State University, Bakersfield, with a Bachelor of Science degree in Business Administration with a concentration in Accounting. Perez was awarded the Businesswoman of the Year by the Kern County Hispanic Chamber of Commerce.

“I am honored to have been appointed and to have the opportunity to serve on the California State Lottery Commission,” Perez said. “I will work hard to ensure that the California Lottery meets the needs and serves the people of California.”

“I am very proud of the work Connie is doing for the state of California,” stated Senator Ricardo Lara. “I am fully committed to working to ensure that more people of color, in particular women, get appointed to sit on boards, commissions and get appointed to positions of leadership for the state.”