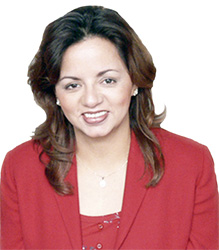 President/CEO and Editor of El Latino Newspaper, Fanny Miller is one of Hispanic Lifestyle’s 2013 Latinas of Influence.

Ms.Miller is President/CEO and Editor of El Latino Newspaper, the No. 1 Hispanic newspaper in San Diego and the largest Hispanic owned Spanish-language newspaper in California.

El Latino-San Diego creates an unforgettable event for Latinas, a day to be pampered, informed and empowered at Celebrando, the largest Latina Conference in Spanish nationwide.

Ms. Miller founded El Latino in 1988 to serve the news and information needs of the San Diego Hispanic Community. El Latino has more than 186,000 weekly readers.

Under her leadership, El Latino expanded its editorial coverage and grew circulation through all of San Diego County. El Latino is a trusted brand that seeks to contribute to the success and well being of Hispanics in San Diego County.

Fanny Miller has been recognized numerous times by the community and nationally organizations for her achievement in Hispanic publishing and business.

Some of Fanny Miller’s recognitions include:

• The Superior Achievement Award 2007 by the National Association of Hispanic Publications -.

• Outstanding Small Business Award by the State of California 2006 –

In 2012 Celebrando was inspired on the three girl’s mother, Maria Alejandra Salgado, who died at the age of 30, from pancreatic cancer leaving her 3 angels to Fanny.