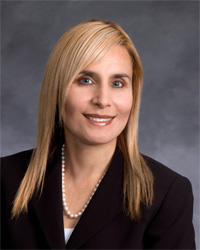 Attorney, business woman, and community advocate, Melinda Guzman is one of Hispanic Lifestyle’s 2013 Latinas of Influence.

Melinda Guzman is sole shareholder of Melinda Guzman, Professional Corporation, a certified Woman and Hispanic owned law firm.  She is a partner of Goldsberry Freeman & Guzman, LLP and a former partner of Diepenbrock, Wulff, Plant & Hannegan, LLP.  Ms. Guzman’s practice focuses on representing private and non-profit corporations, foundations, media interests (radio, television and print media), venture and equity capital firms (in acquisitions, financing, and collections), insurance carriers, and other business interests.   She is a proven litigator, an effective business negotiator and work-out counsel, and is highly regarded for her mediation skills.  Ms. Guzman is also a dedicated public servant with expertise in finance, governance, employment, higher education and business.  She is highly regarded for her work on governance issues and she is a noted speaker and trainer on the fiduciary duties of officers and directors of boards of directors. She is a proven leader with a confirmed track record.

She also served as Chair of the Nehemiah Corporation of America, one of the nation’s largest down payment assistance programs for new home buyers, and as a member of the Board of Trustees for the U.C. Davis Foundation.  She has served on the Board of Directors for the Make A Wish Foundation and the Davis Community Television Board of Directors from 1990 to 1995, and served as its President in 1995.  Ms. Guzman provides on air talent for DCTV productions, including Davis Dialogue and has provided commentary for DCTV’s campaign coverage. She has also served on the Comstock’s Club and KVIE Channel 6 Board of Directors where she chaired the Community Advisory Board and serves as talent for special on air productions.

Ms. Guzman has been recognized as the “Latina Leader of the Year” for 2011 by the Latino Journal Magazine, with the national “Latina Leadership Award” by Latino Leaders magazine in 2008 and was named one of The 100 Influentials by Hispanic Business magazine in 2004.  She has also been honored by the National Association of Women Business Owners with the Luminary Award for her leadership in business, by the Sacramento Hispanic Chamber of Commerce as its 1999 and 2005 Business Woman of the Year, by the Sacramento Business Journal as its Top “40 under 40″dynamic young achievers and by Univision and McDonalds Corporations for her leadership in the Hispanic Community.  She is a well respected business leader for her ethics and integrity and is recognized for creating and developing programs that promote education and business growth and development and for expertise in corporate governance and venture programs.

Ms. Guzman was born and raised in Fairfield, California and is the daughter of the late Amado Guzman and Anita Guzman of Fairfield.  Ms. Guzman is a first generation college graduate of the University of California at Davis (B.A., 1985; J.D., 1988).   She resides in Fair Oaks, California.