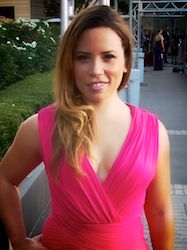 Fanny Véliz, Writer – Director – Producer, is an award winning filmmaker and actress. She writes, directs and produces short and feature-length films. She has appeared on television shows such as SOUTHLAND and independent films like the cult favorite WASSUP ROCKERS.  Fanny is a citizen of both the United States and Venezuela and has created projects which offer new opportunities for Latino Americans to portray human characters with depth and texture beyond the stereotypes that are common in current entertainment faire. She has received special recognition from the US Senate, and the City of Los Angeles for her work as a producer. Fanny studied acting and directing at the University of Colorado and is the mother of two delightful boys.

Fanny recently directed her first feature film HOMEBOUND. This film is special because she was able to rally the community behind her goal of Transforming the Image of Latinos in the Media, and hundreds have supported to make the film possible.

Homebound is the story of Richard Lynn, a successful young man who returns to his small hometown, El Campo, Texas. He has to help his father Gilberto who’s ill with cancer, run the family business, a dilapidated bar. Richard Lynn, accidentally falls in love for the first time with Sofia,  a Venezuelan immigrant who speaks very little English.

As Richard Lynn befriends Sofia’s son, and is reminded of the friendships and culture of his hometown, he learns more about his father’s illness, the truth about his mother’s passing and their plans for him when he inherits it all. His secret desire to burn down the bar, which he blames for his mother’s death, surfaces as he questions everything, his past, his future, and his understanding of family.

The film is heartwarming, with inspiring performances, unexpected twists and a passionate ending that will delight audiences around the world.