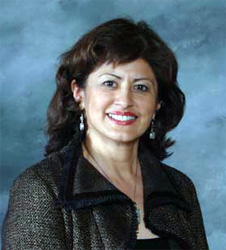 Martha C. de la Torre is the CEO of El Clasificado, which she co-founded in 1988 with her husband and El Clasificado’s COO, Joe Badame. Martha earned a B.S. degree in Accounting from Loyola Marymount University in 1978, and immediately joined Arthur Young & Company. There, Martha became a CPA and audit manager specializing in financial institutions and also assisted businesses in the emerging Hispanic market. Before founding El Clasificado, Martha served two years as CFO of La Opinion, the Spanish-language daily.

The company struggled to remain afloat for several years. In 1995 the young entrepreneurs changed the distribution model from home delivery to bulk-drop model. This re-engineering finally put El Clasificado on a trajectory to success.  El Clasificado is now the largest Spanish-language weekly shopper in the U.S. with circulation of 510,000. Elclasificado.com is the leading Spanish-language online classified portal serving U.S. Latinos with a ranking among the top 7,800 U.S. websites according to Quantcast.com. El Clasificado has been recognized by the LA Business Journal as one of LA’s Fastest-Growing Companies, by Hispanic Business Magazine’s 500 Largest Hispanic Companies and 100 Fastest Growing Companies, by ICIC-Bloomberg Business Week Inner City 100 and has been a Greater Los Angeles finalist for the Ernst & Young Entrepreneur of the Year award. Also, Martha de la Torre is a board member of the L.A. Child Guidance Clinic, which provides mental health services for underprivileged children, and former board member for the L.A. County Education Foundation, which focuses on K-12 education.

Martha is a Regent for LMU as well as a Board Member of LMU’s Latino Alumni Association, which provides scholarships to Latino students. Ms. de la Torre is also the Chair of the International Classified Media Association, representing over 60 classified media organizations around the world.