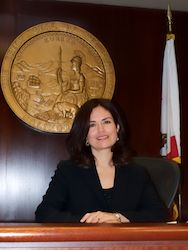 Riverside County Superior Court Judge Raquel A. Marquez is one of Hispanic Lifestyle’s 2013 Latinas of Influence.

[highlight]About our Latina of Influence – Judge Raquel A. Marquez [/highlight]

On December 27, 2011 California Governor Jerry Brown named Raquel A. Marquez of Valley Center, to a judgeship in the Riverside County Superior Court. She had been a senior deputy district attorney in the Riverside County District Attorney’s Office since 2011 and has served as a deputy district attorney in the office since 1991. She earned a Juris Doctorate degree from the University of California, Los Angeles School of Law and a Bachelor of Science degree from Santa Clara University. She filled the vacancy created by the elevation of Judge Carol D. Codrington to the Court of Appeal.  Marquez is the first Latina judge in the history of the Riverside County Superior Court.

Judge Marquez’s career highlights include 19-years, Senior Deputy District Attorney and dedicated to her legal career serving the People of Riverside County as a prosecutor in the District Attorney’s Office. During the early part of her career, she was assigned to do trial work. In this capacity, she prosecuted thousands of felony and misdemeanor cases involving domestic violence, robbery, drugs and other serious and violent crimes. Though she practiced in courthouses throughout Western Riverside County, much of her time was spent at the Perris courthouse, which was well known in the legal community for its MASH-like qualities. Housed in what was an old school house and dilapidated mobile office units, the Perris Courthouse was well known for having no metal detectors, enormous caseloads, the most serious and violent cases and unimaginable work hours. But it was in Perris that she learned to prosecute cases and made some of her most valued memories working alongside many esteemed colleagues that now serve on the bench, or have since retired. For her misdemeanor jury trial work, she was awarded Misdemeanor Deputy of the Year. She later became a trial-team leader and handled serious felony trials in juvenile court.