Articles, Entertainment, Latinas of Influence, On The Menu, People 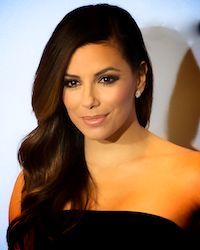 The Golden Globe-nominated, Screen Actors Guild Award-winning, and ALMA Award-winning actress, producer, businesswoman, and philanthropist who is best known for her starring role as “Gabrielle Solis” on the ABC-megahit and award winning “Desperate Housewives,” for eight seasons. She has received numerous awards, including a People’s Choice Award for “Favorite Female TV Star,” a Teen Choice Award for “Choice TV Breakout Performance ” TV Guide’s “TV’s Sexiest Star,” People’s “50 Most Beautiful People,” People’s “100 Most Beautiful People,”  People En Español’s “50 Mas Bellos,” Rolling Stone’s “People of the Year,” was selected three years in a row in the prestigious FORBES Celebrity 100, and was just named FORBES “Highest Paid TV Star” of 2011. Longoria was also named Maxim’s “#1 Hottest Woman in the World” on their annual ‘Hot 100” list, 2 years in a row. On the opposite end of the spectrum, she was named “Philanthropist of the Year” by the Hollywood Reporter and selected as an honoree for Variety’s “Power of Women Awards” among many others.

Eva Longoria at the 2012 Alma Awards

On the feature film front, Longoria recently wrapped FRONTERA in New Mexico alongside Michael Peña and Ed Harris. Upcoming 2013 film releases include BAYTOWN OUTLAWS with Billy Bob Thorton, which recently screened at Cannes Film Festival, A DARK TRUTH, in which she stars opposite Andy Garcia and Forest Whitaker as the bilingual role of “Mia Francis,” in the film that centers on the privatization of water rights in South America and other countries. Longoria released the film CRISTIADA with Andy Garcia and Peter O’Toole earlier this year, and in 2011 Longoria starred in WITHOUT MEN, co-starring Christian Slater, as well as lent her voice to the holiday animated film ARTHUR CHRISTMAS. Other movie credits include OVER HER DEAD BODY, costarring Paul Rudd, Lake Bell, and Jason Biggs, THE SENTINEL, opposite Michael Douglas, Kiefer Sutherland and Kim Basinger, and HARSH TIMES, THE HEARTBREAK KID, and LOWER LEARNING.

Longoria has signed on as Executive Producer of NBC’s upcoming non-scripted “Ready for Love,” an innovative and dramatic new relationship show about making real connections which premieres Tuesday, March 26th after “The Voice.” Longoria hand-selected three successful and handsome men who are committed to finding the right women with whom to share their lives. Additionally, Longoria is Executive Producer of Lifetime’s upcoming “Devious Maids” alongside “Desperate Housewives” alum Marc Cherry. The show centers on five Latina maids (Ana Ortiz, Judy Reyes, Roselyn Sanchez, Edy Ganem, and Dania Ramirez ) with ambition and dreams of their own, while they work for the rich and famous in Beverly Hills.  Longoria will also star in and produce Hulu’s animated series “Mother Up,” written and directed by “Family Guy” vet Michael Shipley. Additionally, Longoria recently signed a First-Look development deal with NBC Universal which includes a non-writing, executive producer agreement with Longoria and her production company, UnbeliEVAble Entertainment.

This September marked Longoria’s 6th year as both host and executive producer of the National Council of La Raza ALMA Awards, honoring Latino artistic achievement in the television, film, and music industry.  The NCLR is the largest Latino rights and advocacy organization in the United States.  Longoria also executive produced, in collaboration with Academy Award nominated Shine Global, the documentary HARVEST. The documentary focuses on the plight of the estimated 500,000 child farm workers, whose tireless efforts help feed America, and presents compelling stories of a select number of children and their families as they travel from their homes in California, Texas, and Florida to harvest crops in multiple states.

On the directing front, this year Canon selected Longoria as one of their directors for Project Imaginat10n, the first photography-inspired film festival in history. Longoria is joined by Jamie Foxx, Biz Stone (founder of Twitter), Georgina Chapman (designer for Marchesa), and James Murphy (musician, LCD Soundsystem), with Ron Howard acting as their mentor. The project will feature ten storytelling themes in which consumers can submit their personal photos: Setting, Time, Character, Mood, Backstory, Relationship, Goal, Obstacle, The Unknown, and a surprise 10th theme. The five directors, including Longoria, will select their top 10 photo submissions and will each direct a short film based on these photos. The films will be revealed at the Project Imaginat10n Film Festival in 2013. Longoria also combined the pride of her Latin heritage with her strong support of the 2010 Census by partnering with Pepsi to direct and produce a documentary film “Latinos Living the American Dream,” along with the YO SUMO Campaign. Additionally, Longoria, Zoe Saldana, and Olivia Wilde were selected by Glamour Magazine to each direct a “2011 REEL Moments” short film based on true-life stories of Glamour readers.

In March 2008, Longoria partnered with Celebrity Chef Todd English and opened the Hollywood steakhouse and bar Beso Hollywood. This was followed by SHe Restaurant by Morton’s that opened in Las Vegas in January 2013.

As if that is not enough, Longoria’s first fragrance EVA, by Eva Longoria was launched in April of 2010. Her second fragrance, Evamour launches March 29th of this year. Longoria released her first New York Times best selling cookbook EVA’S KITCHEN: COOKING WITH LOVE FOR FAMILY AND FRIENDS in April of 2011, available in both English and Spanish.

Always the philanthropist, Longoria has her own charities and organizations that are very close to her heart. Longoria established “The Eva Longoria Foundation” (www.evalongoriafoundation.com) in 2010, which helps Latinas build better futures for themselves and their families through education and entrepreneurship. Additionally, she serves as the national spokesperson for PADRES Contra El Cancer (Parents Against Cancer) (www.iamhope.com), a nonprofit organization committed to improving the quality of life for Latino children with cancer and their families. Longoria also co-founded the non-profit organization “Eva’s Heroes” (www.EvasHeroes.org), dedicated to enriching the lives of those with developmental challenges by providing an inclusive setting built on the four tenets of interact, grow, learn, and love. She also co-founded, launched, and participated in the first ever celebrity Twitter auction called “TwitChange” in which celebrities auction off  “tweets” and “mentions” for Haiti earthquake victims.

Longoria currently works closely with the United Farm Workers, the Mexican American Legal Defense and Educational Fund, the Dolores Huerta Foundation, and the National Council of La Raza, to name a few. In addition, she was recently selected by President Obama as a commissioner to the National Museum of the American Latino Commission.  The National Museum will create a home for the historical artifacts, images, and personal stories documenting more than 500 years of American Latino contributions to the United States. Longoria was also personally selected by the President to serve as a National Co-chair for the re-elect Obama Campaign and as commissioner for his Inauguration.

Longoria is currently in her last year of Graduate school working on her thesis for her Master’s Degree in Chicano Studies/Political Science.