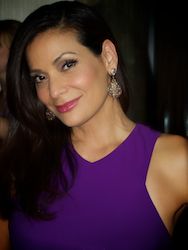 Actress, community volunteer and mom, Constance Marie is one of Hispanic Lifestyle’s 2013 Latinas of Influence.

Constance Marie stars as Regina Vasquez, Daphne’s hard-working single mom in the ABC Family television program “Switched at Birth”. Her character whole life is flipped on its head when it’s discovered that her biological daughter has grown up under an entirely unfamiliar roof, while she’s raised a baby not her own.

Constance Marie is most known for her role as the hard hard-working and devoted wife, Angie, in The George Lopez Show.  For this beloved role, The Imagen Awards honored her with a “Best Actress in a TV series” award and a nomination for “Best Actress in a Comedy Series.” She has made guest appearances on According to Jim, CSI, and The Secret Life of an American Teenager.

In her personal life, Constance recently welcomed her first child into the world, Luna Marie Katich. Constance has been candid about the difficulties she faced trying to get pregnant before eventually turning to IVF.  She is determined to reach out to women in similar situations, and is proud to let them know that they are not alone.  In addition to being extremely knowledgeable about pregnancy wellness, Constance is a vegetarian and organic follower. She also practices a “green” lifestyle and is knowledgeable about “green” living. For instance, Constance decorated Luna’s nursery with completely organic and non-toxic materials. From the paint to the furniture and carpeting, Constance made sure that the room was safe for her baby and for the environment.

Constance’s thriving career began when she was a teenager in Los Angeles’ underground break-dancing scene. She was selected out of a group of 500 hopefuls to dance on tour with David Bowie. Upon returning to Los Angeles, she was cast as a dancer in the movie SALSA. The film’s choreographer, Kenny Ortega, introduced her to Steve Tisch, who offered Constance her very first acting job, a starring role as Penny on the CBS series Dirty Dancing.

It wasn’t long before Constance was working in feature films, starring as Toni Sanchez in the New Line film MI FAMILIA, directed by Gregory Nava, with whom Constance has worked numerous times. She won praise from fans for her portrayal of Tejano music legend Selena Quintanilla’s mother, Marcella, in the blockbuster film SELENA.  Only a year older than her onscreen daughter, the young and sexy Constance had to undergo four hours of extensive make-up in order for her to portray Selena’s mother. Constance also starred in the celebrated film, TORTILLA SOUP, playing Yolanda, the daughter of Raquel Welch. The film received an Alma Award nomination for “Outstanding Motion Picture.”