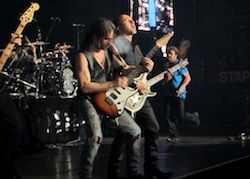 Photos and Article by Gabriela Sandoval

It was a packed house full of excitement as we all waited for MANA to step on to the stage and entertain us with all of our favorite songs. MANÁ’s Drama y Luz concert started with a classic “Oye Mi Amor” and that was the beginning of their fabulous 2 1/2 hour show where they performed songs from their new album titled Drama y Luz as well as many of our favorites from past albums. MANÁ  also had a guest star, Marco Antonio Solis  and together they performed, “Si No Te Hubieras Ido.” It was an exciting moment for all of us to see this great performance by two amazing artist.

There came a moment in the show where Fher pleaded to the audience about the importance for all of us Latinos to vote so that our voices are heard and he waved the Mexican flag on stage with great pride.

Earlier in the day MANÁ  became the artists to play the most sold out concerts ever in the thirteen year history of STAPLES Center.

I have been a follower of MANÁ  and their music since there album “Donde Jugaran Los Ninos” came out in 1994 and over the years have attended several of their concerts and for me this was another memorable concert and it made me remember why MANÁ is still relevant after 15 years and why I continue to be a fan.

Voto Latino is proud to announce that it will be offering non-partisan voter registration at the upcoming U.S. tour dates of the iconic Latin rock band MANÁ. Currently in the midst of the second U.S. leg of their critically acclaimed Drama y Luz Tour, the multiple GRAMMY winning superstars will shatter the record for the most concerts performed by any artist in the history of STAPLES Center as they return to Los Angeles for three more sold-out nights starting this week.  MANÁ latest multi-platinum album Drama y Luz, spent Nine weeks at #1 on Billboard’s “Top Latin Albums Chart” and is still increasing in sales as it rated as this week’s “Greatest gainer” a full year after release. The album has produced three consecutive #1 singles, and went on to win the most recent GRAMMY and LATIN GRAMMY awards for a Latin Rock artist.

Says actor and Voto Latino co-founder Rosario Dawson: “When we started Voto Latino in 2004, we wanted to be part of a movement of people of every color, from every background, using art and music and politics to make a difference for all of us — every single American. Our dream is coming true. Artists like MANÁ and dozens more we’ll work with in 2012 are pitching in to do everything they can to help us represent for our country.”

Voto Latino will be registering voters at the following MANÁ concert dates: