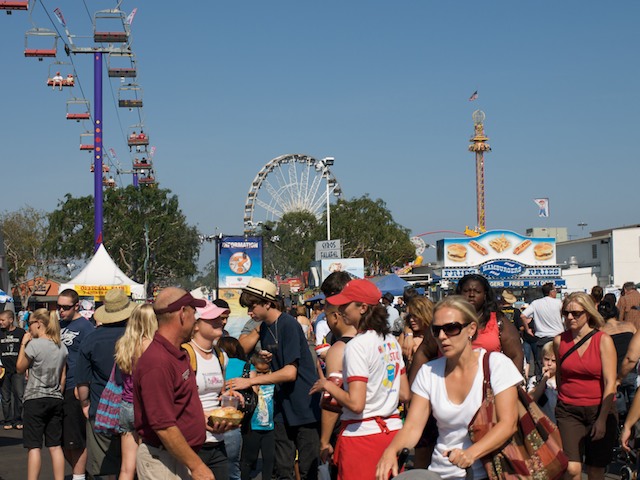 The first full week of the 2013 OC Fair is dedicated to cowboys and cowgirls alike as bull riding, rodeo and equestrian action takes center stage. The hair-raising Extreme Rodeo pits brave cowboys against raging bulls on Wednesday, July 17, and Friday, July 19. Professional riders put their lives on the line as they try to hang on for eight seconds in Bull Riding on Thursday, July 18 and Saturday, July 20. Closing the week on Sunday, July 21, is Fiesta del Charro, which exhibits the centuries-old Mexican cowboy tradition of performing breathtaking stunts while riding on a horse.

The second week of the 2013 OC Fair invites Fairgoers to witness the raw power of the trucks in the Monster X Tour on its first visit to the OC Fair. Monster and Tuff Trucks crush their way to victory on Wednesday, July 24, Friday, July 26, and Sunday, July 28. Monster Truck action with quad racing can be enjoyed on Thursday, July 25 and Saturday, July 27.

The third week of the 2013 OC Fair showcases the agility of dogs and humans alike. The new Amazing Dobermansshow is sure to dazzle with dogs performing mind-blowing tricks Wednesday-Friday, July 31-August 2, with performances at 2 p.m., 4 p.m. and 6 p.m. each show date. As a brief interlude to the canine agility excitement, theUltimate Dodgeball Championships return for a second year on Saturday, August 3. Fabulous canines will take back over on Sunday, August 4 as the OC Police Canine Association Show rolls in to demonstrate the talents of the force’s four-legged officers.

The final week of the 2013 OC Fair is filled with destruction as the demolition derbies come back to town in three different formats. The Orange Crush Demolition Derby, on Wednesday, August 7 and Saturday, August 10, fills the air with the satisfying sounds of crunching metal. The Motor Home Madness Demolition Derby, on Thursday, August 8 and Sunday, August 11, proves to Fairgoers that motorhomes aren’t just for family vacations. Not to be outdone, the women of the Damsels of Destruction Demolition Derby show off their chops on Friday, August 9 as they raise funds for the Susan G. Komen Foundation of Orange County.

Reserved seats for action sports at the 2013 OC Fair are on sale now via Ticketmaster or at the OC Fair & Event Center Box Office, which is open 5 p.m.-9 p.m. Wednesday and 10 a.m.-4 p.m. Saturday and Sunday. Box Office hours will expand as Fair dates approach. Tickets are available at all Ticketmaster outlets, online at ticketmaster.com or by phone (800) 745-3000. Reserved seats include free Fair admission for the day of the show. Limited free general admission seating with Fair admission is also available for each show on a first-come, first-seated basis.

The 2013 OC Fair, themed Come & Get It,is July 12 – August 11 and brings 23 days of food, rides, exhibits, animals, music, action sports and fun, as well as the Toyota Summer Concert Series at the Pacific Amphitheatre, The Hangar and Action Sports Arena. The Fair is open Wednesday-Sunday. Concert tickets, action sports reserved seats and single-day general admission are available for purchase online at ticketmaster.com or from the on-site Box Office. The popular Super Pass, which offers the passholder 23 days of admission, is available for purchase online at ocfair.comfrom the onsite Box Office.

The OC Fair & Event Center is located off the 405 and 55 freeways at 88 Fair Drive in Costa Mesa. For more information, please visit ocfair.com, become a fan at Facebook.com/OCFair, follow us at twitter.com/ocfair or call (714) 708-1500. Also, download the free OC Fair iPhone and Android apps available this summer.