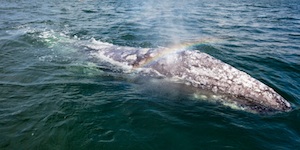 The America’s Cup boats are not the only leviathans visiting San Francisco this summer.  The San Francisco Zoo is delighted to partner with the Consulate General of Mexico in San Francisco to be the exclusive U.S. venue for the special traveling exhibition, Travesía: Journey of the Gray Whale. On view in the Zoo’s Pachyderm Building from June 8 to September 17, this fascinating show created by “Proyecto Ballena Gris” (the Gray Whale Project) tells the story of one of the longest migrations in the animal world from the fertile waters of the Arctic seas to the protected lagoons of Baja.

“We are honored to be hosting this important show,” said Tanya Peterson, President and Executive Director of the San Francisco Zoological Society. “Most visitors don’t realize that San Francisco Zoo is next to an oceanic superhighway on which the gray whales make an annual migration. This exhibition fits perfectly with the Zoo’s mission to educate the public about conservation, and survival of these protected cetaceans could not happen without the collaboration of three nations: Mexico, Canada and the U.S.

“Travesía was conceived to be shown in the key cities by which the whales travel, thus Vancouver, San Francisco and Ensenada were selected for the show,” said Ambassador Carlos Felix, Consul General of Mexico. “We wanted Bay Area families to be able to enjoy this exhibition and the San Francisco Zoo was the perfect fit, since it is largely visited by families from all origins. And since the exhibition has an interesting combination of science, technology and contemporary art, bringing the show outside of the conventional museum space was an excellent choice.”

The Proyecto Balleno Gris project statement describes their inspiration for the exhibition: “Their huge dimensions, the yearly ordeal of their migratory journey, the tenderness that mothers display towards their calves, their incredible evolutionary history and the friendly coexistence that has been reached between their species and humans, are only a few of the many aspects that would help to explain why we became interested in developing a project that aims at communicating this feeling of amazement through the languages of art and knowledge.”

Travesia:  Journey of the Gray Whale is a bi-lingual exhibition presenting both artistic and scientific interpretations of the gray whale’s story. The artistic component integrates mixed-media works by eight renowned contemporary Mexican artists—Triodo Collective, Ariel Guzik, Luis Orozco, Emilio Rangel, Alejandro Boneta, Alex Bolio, Balám Bartolomé and Pilar Villela—exploring themes of man’s relationship with the gray whale, the underwater environment of the gray whale, their deep connection to the land and their physical evolution as a species. The artists express these ideas through sculpture, video, animation, stencil, sketch and light and shadow. The exhibition also documents the route of the migration and the beauty of the El Vizcaino Biosphere Reserve with photographic and video work by Alejandro Boneta.

The scientific component of the exhibition explores the changing relationship between humans and the whales as well as the adaptability and the heritage of the gray whale’s breeding grounds. It also addresses the delicate balance between local industries and gray whale protection, specifically the salt industry located in the Mexican town of Guerrero Negro which is just a few miles away from one of the most important gray whale sanctuaries, Laguna Ojo de Liebre. These themes are brought to life through photo-animation, two- and three-dimensional models of the gray whale and photography of murals painted by the children of Guerrero Negro.

Travesía: Journey of the Gray Whale was first presented in Ensenda, Mexico at el Centro Estatal de las Artes de Ensenda (CEARTE) in 2012. In 2013, it was on view at the Vancouver Science World from February through April. After its presentation at the San Francisco Zoo, the exhibition will be permanently installed in an eco-museum to be constructed in Guerrero Negro, Mexico.