Tim Martinez Inducted into The Circus Ring of Fame 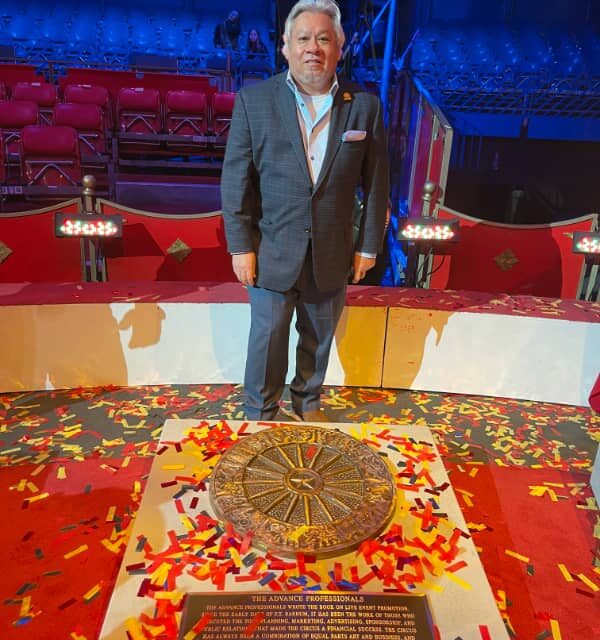 Stockton California resident Tim Martinez was inducted in the Circus Ring of Fame over the weekend. He was one of the many inductees in the Advanced Professionals category and is the first group category to be inducted in the CROF.  The ceremony happened at the Circus Sarasota Tent at Nathan Benderson Park on February 5th, 2022.

Martinez worked as a National Promoter for the circus setting up the marketing and promotion of the Ringling Bros. Red & Blue Units.  He and over 90 former attendees were enshrined in the Advanced Professionals group.

“It was an honor to be a part of the production of the Greatest Show on Earth.  Those memories and all the friendships I made are what I will always treasure and it was incredible to be a part of the ceremony and recognized together with so many respected colleagues,” stated Martinez.

The Advanced Professionals are the people behind the scenes who do everything from selling tickets, promotion, media buys, public relations, booking, settlement and creative services. There is a long time saying, “Without the business, there is no show,” and these people are the ones who make the circus happen in each city and venue.  This class includes those that worked on the Ringling Bros. shows from 1970 – 2017 when the circus ended its 146 year run and were responsible for selling over a quarter billion tickets over that period of time.

The 2022 Circus Ring of Fame inductees are:

The new inductees to the Circus Ring of Fame will join the 150 honored since 1987. All of those recognized have made a significant contribution to the art and culture of the circus.