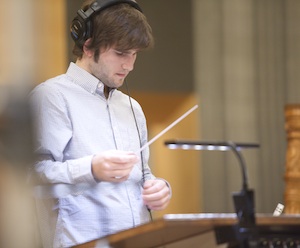 Lucas Vidal has recently completed work on the music for the blockbuster film Fast and Furious 6 for Universal Studios and director Justin Lin. Other recent projects include The Raven with John Cusack and The Cold Light of Day starring Bruce Willis and Sigourney Weaver, resulting in a nomination for “Discovery of the Year” at the World Soundtrack Awards.

A native of Madrid, Vidal was exposed to the intricacies of music composition at a very young age, developing composition chops that fostered a distinct voice and a unique method of longhand writing skills. He then proceeded to make history while attending Berklee College of Music, where he was the youngest student to ever compose and record the score for a feature film with an 80-piece orchestra. After graduation he moved to New York to continue his studies under the guidance of Richard Danielpour while attending the Julliard School of Music.

In addition to numerous feature films, advertisements and video game soundtracks, Vidal’s resume includes compositions for the Boston Ballet, Boston Symphony Hall, and Los Angeles’ renowned Disney Hall. He has recorded more than 100 sessions in most of the major studios throughout the United States and Europe. Vidal currently splits his time between Madrid and Los Angeles.

KindredSPIRITS will present its sixth annual gala concert on Sunday, June 23 at the Walt Disney Concert Hall in Los Angeles. The event will benefit Cancer Support Community, a global network of education and support whose mission is

“To ensure that all people impacted by cancer are empowered by knowledge, strengthened by action, and sustained by community.”
The concert also will honor Susan Love, M.D., President of the Dr. Susan Love Research Foundation, for her research contributions to the eradication of breast cancer, as well as Grammy Award-Winner Melissa Manchester, for her artistic contributions in raising much needed funds for cancer research and support.

The acclaimed KindredSPIRITS concert will feature Manchester, who will be performing a special piece she wrote titled, “The Power of Ribbons.” Also performing will the be the Los Angeles Jewish Symphony under the direction of Dr. Noreen Green, as well as Spanish composer Lucas Vidal (The Raven), the IFMCA-nominated breakout composer of the year (2011) and cancer survivor, who is debuting a new orchestral piece at the KindredSPIRITS 2013 concert. Other performers will include: David Streets, owner of the David Streets Gallery and a fighter of cancer, who will read from the works of Maya Angelou’s When I Think of Death; a choir made up of cancer survivors and their families performing Lucas Richman’sWe Share a Bond; musical theatre performer Ilysia Pierce; gospel soprano Dr. “Dee” Diane White Clayton; renowned tenor Ilan Davidson; and the Faithful Central Bible Church Gospel Choir. This year, attendees can see their loved ones’ names projected during the performance of the songs, “Celebrating Survivors” or “In Memoriam” for a $10 donation per name.

“We are here to honor these heroes in their fight against cancer,” notes Cantor Ilan Davidson, founder of KindredSPIRITS. “As our community comes together, and with the help of generous donors, world-class artists, and concert attendees, we can forge ahead in battling cancer and providing relief to the persons and families affected by this global disease.”