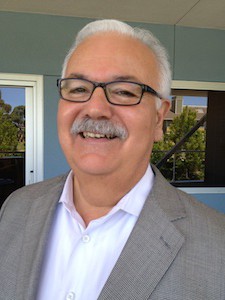 The CTA Board of Directors on Tuesday named former Santa Maria teacher and CTA Governmental Relations Director Joe Nuñez as the new executive director of the 325,000-member California Teachers Association. Nuñez succeeds Carolyn Doggett, who is retiring in August after 30 years at CTA, the last 18 as executive director.

Born and raised in Guadalupe in Santa Barbara County, Nuñez has broad experience in CTA, serving as a teacher leader and president of the Santa Maria High School District Faculty Association before becoming staff in 1995. He also served on the State Board of Education for six years. Nuñez joins the executive leadership team of CTA President Dean E. Vogel, Vice President Eric Heins and Secretary-Treasurer Mikki Cichocki.

“Joe’s background and experience in and out of the classroom makes him the perfect fit to help move our organization forward,” said Vogel. “His knowledge of education policy, his political expertise and his hard work on behalf of students and educators are well-known and respected by educators, and politicians and community leaders in Sacramento and throughout California.”

Becoming associate executive director for Governmental Relations in 2004, Nuñez has led several successful CTA political campaigns. He served as chair of the Alliance for a Better California in 2005, when the labor and community coalition defeated four initiatives that would have hurt students, public schools and workers. He also directed campaign efforts last year for the defeat of Proposition 32 and the passage of Proposition 30, which will bring $47 billion to schools and colleges over the next seven years.

“As a graduate of California public schools and a teacher for almost 20 years, it’s an honor to work on behalf of educators across the state,”
said Nuñez. “CTA’s reputation as one of the most influential organizations in California is because of the passion our members bring to providing the highest quality education to our students – and their overwhelming commitment to California’s future and prosperity. I look forward to working with the CTA officers, Board of Directors and staff to build upon our foundation of successes and realize new victories for our students, for our members and for California.”

Nuñez will oversee the daily operations of CTA and direct the work of the union’s 435 staff.

Carolyn Doggett said she is leaving CTA in good hands. “When you have worked with an organization for so long and for a cause you’ve devoted your life’s work to, retiring can be bittersweet, but knowing that Joe will be at the helm to help our leaders and staff carry out the mission of CTA makes me excited for all that’s ahead for educators and their students,” she said.

[highlight]Nuñez served on the California State Board of Education from 2001 until January 2007.  He served as the assistant executive director for CTA, overseeing CTA Region 2 from 2000 to 2004.  From 1997 to 2000, Nuñez was a legislative advocate for the association.  He was the UniServ Director for the Stockton division of CTA, a position he held from 1995 to 1997.  In 1992, he received the CTA WHO (We Honor Ours) State Award, and in 1987 he was the recipient of the California Agriculture Teachers Association’s Teacher of Excellence Award.[/highlight]

Nuñez taught at Ernest Righetti High School in the Santa Maria Joint Union High School District from 1975 to 1994, where he also served as the advisor to the school’s Future Farmers of America. He taught agriculture science, practical science, algebra and ornamental horticulture. He earned his bachelor and Master of Science degrees from California Polytechnic State University, San Luis Obispo.

The 325,000-member CTA is affiliated with the 3.2 million-member National Education Association.