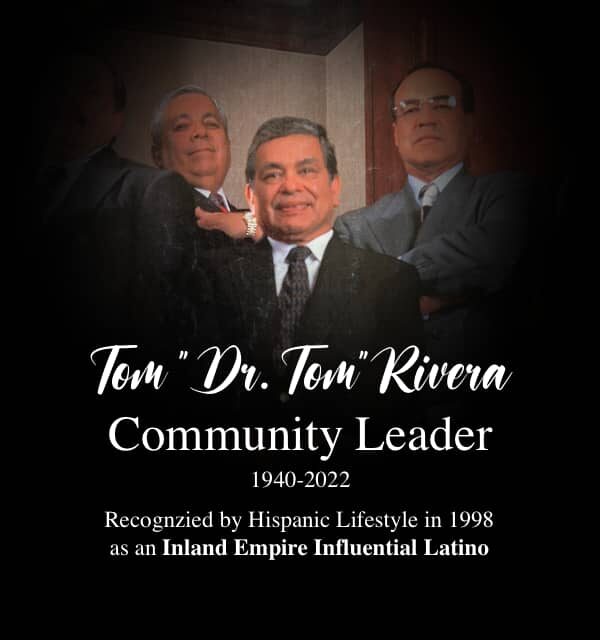 Long-time college administrator, educational leader Tom “Dr. Tom” Rivera passed Tuesday on March 8, 2022 surrounded by his family at the age of 82. Dr. Tom was recognized by Hispanic Lifestyle for his community service at the Inland Empire Hispanic Image Awards in 1999.

Dr. Tom M. Rivera, or “Dr. Tom,” as he is commonly known, has over 47 years of experience in education, including at the elementary school, community college, and university levels. Rivera served as a Counselor/Human Relation Coordinator at San Bernardino Valley College from 1970 to 1972. He retired from California State University, San Bernardino in 2011, after serving nearly 40 years as an administrator. There he initiated numerous programs to motivate underrepresented students to graduate from college.

Rivera has a life-long history of commitment to the community. He was elected to the Colton Joint Unified School District Board of Trustees and served on the boards of the Rialto Teachers Association, United Way, Easter Seal Society, Omnitrans, Catholic Charities, and Rolling Start. He has served on the San Bernardino County Bilingual Task Force, the San Bernardino Valley College EOPS Program, the San Bernardino Drug and Gang Task Force, the University of California, Riverside Chancellor’s Chicano Advisory Committee, the Boys and Girls Club of America, and Sister Cities International Mexicali-Villa Hermosa. In 2003, Governor Brown appointed Rivera to the California Regional Water Quality Control Board, Santa Ana Region. Rivera is especially proud of his charter member status since 1967, with the Kiwanis Club of Greater San Bernardino, where he served as president for two terms.

Rivera points to three major community projects as his most gratifying accomplishments. In 1984, along with 4 other educators, Rivera co-founded the Inland Empire Future Leaders Program, a leadership training program for 8th and 9th graders designed to address the dropout rate of Hispanic students. To date, the organization has graduated nearly 4,200 participants; it boasts a 99% high school graduation rate and a 90% college-going rate. The organization has operated with a 100% volunteer staff for its entire history. 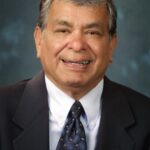 In 2013, in partnership with CSUSB Pfau Library and fellow educators Frank Acosta and Henry Vasquez, Rivera initiated the South Colton Oral History Project, a study of life in a segregated community from the 1890s to 1960s. The team taped 70 interviews of long-time South Colton residents. Known as “The Mexican side of town,” the 1.3 square mile area had its own businesses, churches and schools but had no representation in the Colton City Council or school board, and its residents were not allowed to purchase property in the north part of town. The study documents lives enriched and demeaned by the social, cultural, and legal realities of the time.

Rivera and his wife Lily have been married for over 52 years, have 3 children, and 2 grandchildren. They reside in Grand Terrace. In a wheelchair for 36 years as a result of Guillain-Barré syndrome.