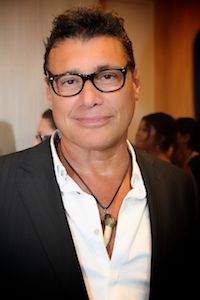 Best known for his role as Manny Ribera in the 1983 film Scarface actor Steven Bauer spoke with Hispanic Lifestyle on the red carpet at the 2013 Imagen Foundation Awards. Our conversation began with Steven recalling how the movie Scarface was received.

From the web
Born Esteban Ernesto Echevarría Samson in Havana, Cuba, the son of Lillian Samson Agostini, a schoolteacher, and Esteban Echevarria, a pilot who worked for Cubana Airlines.Bauer’s maternal grandfather was a Jewish refugee from Germany, and Bauer’s maternal grandmother was a Cuban of partialItalian ancestry.His stage surname comes from his maternal great-grandmother. Bauer’s parents fled from Cuba to Miami, Florida, on July 4, 1960, following Fidel Castro’s Revolution. He graduated fromMiami Coral Park High School in 1974. Originally intending to become a musician, Bauer turned to acting while attending Miami-Dade Community College, but then transferred to the University of Miami, where he studied in its Department of Theater Arts and performed at its Jerry Herman Ring Theatre where he became friends with actor Ray Liotta.