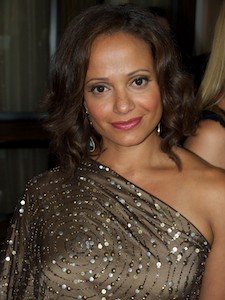 She always keeps me on my toes. The very talented Actress Judy Reyes talks with Hispanic Lifestyle on the red carpet of 2012 Imagen Foundation Awards. In this segment Judy talks about acting in the pilot of the hit television program, Devious Maids.

From the web
Judy Reyes (born November 5, 1967) is an American television actress, best known for her roles as Carla Espinosa on the NBC sitcom Scrubs (2001-2009), and as Zoila Diaz in the Lifetime comedy-drama Devious Maids (2013–present).

Devious Maids cast includes Ana Ortiz as lead character, and Dania Ramirez, Roselyn Sánchez, Edy Ganem, and Judy Reyes as other maids, with Susan Lucci, Rebecca Wisocky, Tom Irwin, Brianna Brown, Brett Cullen, Mariana Klaveno, and Grant Show in feature main roles. The series centers on four Latina maids working in the homes of Beverly Hills’ wealthiest and most powerful families, and a newcomer who made it personal after a maid was murdered and determined to uncover the truth behind her demise, and in the process become an ally in their lives.