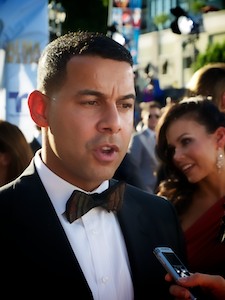 Hispanic Lifestyle ‘s exclusive interview with actor Jon Huertas. Jon stars on the ABC television program Castle. We spoke with Jon on the red carpet of the 2012 Imagen Foundation Awards. In our conversation we talk about his work on Castle and Latinos on television.

From the web
Jon Huertas is an American actor. He is best known for his role as Sergeant Antonio ‘Poke’ Espera in HBO’sGeneration Kill, Joe Negroni in the film Why Do Fools Fall in Love, and homicide detective Javier Esposito in Castle.

From Jon’s website
2013 marks the year that Huertas’ abilities as a triple threat are fully realized with the upcoming release of his long-awaited pop/R&B debut album, Grown and Sexy Music, through Midrats Entertainment/Sly Doggie Productions. A highly seasoned actor of the stage and screen, Jon Huertas is best known for his multiple-award-winning performance as Det. Javier Esposito on the ABC hit television series Castle as well as his portrayal of Sgt. Antonio “Poke” Espera in HBO’s Emmy Award–winning miniseries Generation Kill.

As a kid growing up on the East Coast, Huertas got his first taste of performing when he was given a role in his Catholic elementary school’s Christmas program. He recalls, “When I sang my solo, I remember seeing that one of the nuns—she was one of the meanest nuns in the school—was crying. I feel like she was taken aback by the performance. That’s the moment where I said, ‘Hey, I can do this. I want to affect people with performance.’”