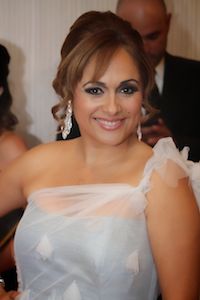 Elizabeth Espinosa is an Emmy-award winning journalist and is a contributing anchor and reporter for the Cable News Network (commonly referred to as just CNN). She was recently the host of her own CNN prime-time daily talk show Sin Limites, a program that ran on CNN Latino throughout the U.S.

Elizabeth, who also continues to report for KTLA-TV 5 in Los Angeles, and hosts her own radio show “Thompson & Espinosa” on KFI-AM 640 from 1PM-3PM, is an entrepreneur, and one of America’s leading women providing a voice for those who cannot speak for themselves, inspiring others to achieve their goals and to overcome obstacles. Her compelling story of life as a primary caretaker for her special needs brother caught the attention of Oprah Winfrey, making Elizabeth one of the 10 finalists for OWN’s “Your Own Show” contest – ultimately lifting her into the national spotlight.

“In fourth grade I learned more than just solving complex math problems,” Espinosa recalls, “I learned to be an advocate, to stick up for my friend who wore glasses because she was cross-eyed. I realized she was bullied just because she was “different” and it made me want to stand up.”

The daughter of immigrant parents from Mexico and El Salvador, Elizabeth credits her great compassion, empathy and the ability to connect with others to her childhood in a religious, Latino household where her parents never let her forget their humble beginnings. Her experience with her brother Christian is the basis for her motivation to help others and the source of her empathy for those struggling in the world. Such a significant experience opened her eyes to her true calling:

“My brother Christian was asphyxiated at birth causing him significant and permanent brain damage,” she remembers, “Today, I look back in awe, and with appreciation to those fourth grade bullying experiences that unbeknownst to me, prepared me for what was to come.”

What most of Elizabeth’s growing throng of fans may not know is that this multi-lingual, globe-trotting journalist was originally destined for a life as a lawyer, inspired by her brother’s medical malpractice case.

She was awarded a full scholarship at a prestigious law school, but decided that her advocacy for rights of the disabled didn’t pass through a court room, but rather through a lens which ultimately led her to journalism. Her first on air assignment in news was at Telemundo’s San Francisco affiliate reporting in Spanish. She then jumped to the San Diego FOX Affiliate, and later Univision’s flagship Los Angeles station, K-MEX 34.

Following Univision, Elizabeth was sought after by FOX 11 where she became one of the on air personalities on the highly rated Emmy award winning weekday morning show “Good Day LA.” She also worked as a national correspondent for the syndicated FOX program “Good Day LIVE.”

Adventurous and fearless, Elizabeth has scaled the mountains of Rwanda to get up close and personal with Silverback Gorillas of the region. In 2005 while vacationing in East Africa, Elizabeth interviewed child warriors belonging to Joseph Kony of the LRA (Lord’s Resistance Army), a ruthless leader who has terrorized northern Ugandans for over 20 years. When Elizabeth returned to Los Angeles she co-wrote, co-produced and co-hosted a half hour special report – earning her one of her two Emmys.

While some reporters seek out sensational stories, Elizabeth aims to empower and enlighten all viewers. Her authenticity and compassion provide her with the unique ability to connect with those facing in a time of crisis. Without question, this uncanny ability is what makes her not just a television favorite, but someone who is sought after for her compelling and motivational speeches. Politicians—including President Obama-appointed U.S. Secretary of Labor Hilda Solis, California State Senator Gil Cedillo and Los Angeles Mayor Antonio Villaraigosa— all have honored Elizabeth for her contributions to the community and to humanity.

Elizabeth is also very proud of her Hispanic heritage motivating her to use her hard earned position to inspire and encourage others in working class communities. She firmly believes that everyone can achieve the American Dream as long as they are willing to work hard and have faith. Elizabeth is active in supporting minorities, for which she frequently appears at empowering community events and other speaking engagements. She is also frequently interviewed herself regarding issues surrounding these communities and often appears in several publications and on TV shows. It’s no surprise, Elizabeth has been honored by the Obama administration for her humanitarian and labor rights outreach.

Recognized by numerous national, state and local leaders from government to private entities for her work in television and ongoing volunteerism, Elizabeth Espinosa has, and continues to make her mark as one of today’s most current, important and relevant media icons today. Success can be defined in many ways, but for Elizabeth a big part of it is to fill each day with new lessons and “ to find joy in everything you do.”