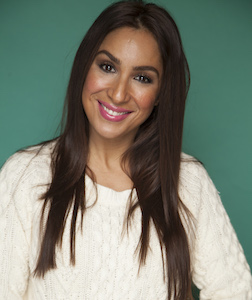 Liana Mendoza, is considered “ethnically ambiguous” in Hollywood. However, she is Native American (Chichimeca Tribe and her given name is Strong Vine) Named “Sexiest Spaniard” by Latina Magazine, She Grew up between North East Los Angeles and San Juan Del Monte in an Adobe Hut made by the hands of her ancestors on land still currently occupied by her family.

ABOUT THE VIDEO | In her conversation with Hispanic Lifestyle Liana spoke about career, being fearless and shares advice that has served her well.

She joined the cast of the FX, Emmy-Award Winning, American Horror Story: Hotel in 2015. The show was nominated for a Golden Globe 2016. Since then, she has joined the cast of Baskets and Better Call Saul. This stream of success led her to become the Entertainment Ambassador for LBA (Latin Business Association) which represents over 800,000 companies and businesses as well as over 50 Fortune 500 companies. Most recently her win for “Latina Entertainer of The Year” has created a buzz as well as sponsorship around this rising star. Her ever growing list of Television credits include popular shows such as: Scandal, Bones and Disney’s Epic Offenders any various others. Most recently, she sold her first screenplay concept and is set to star in her original idea, romantic comedy feature film called “Mr. Break-up”, along with other comedy stars Red Grant and Eddie Steeples.

An all around versatile talent, Ms. Mendoza began performing as a tap dancer at age 3 and moved onto modern jazz, ballet and hip hop. She was invited into a professional ballet dance company by age 8 and eventually was Invited to attend Hamilton High School for Performing Arts. Mendoza, began training in Kapap (Israeli Hand to Hand Combat) and training with world renowned fellow stunt man Bob Yerkes. With over a decade of training, she began a career in the world of acting as a stunt-woman. Mendoza was honored by Sag-Aftra with an Appreciation Diversity Award and given Special Congressional Recognition for her work as a stunt woman on G.I. Joe: Rise of Cobra, Jimmy Kimmel, Crank 2: High Voltage, and film Decisions along with recognizing as her volunteer work in the community, especially with at-risk and inner city youth.

Mendoza credits her aunts Yvette Saucedo and Juanita Anguiano with being the biggest influence for her being able to have obtained her dreams, goals and success. “Their support was insurmountable and necessary for my mentality of success” she states.

Believing in the philosophy that that we all pass the elevator back down–in the words of Jack Lemmon–she involves herself in youth programs and charity organizations including but not limited to Operation Smile, Sober College, Help as One, Every Monday Matters, Stand up in the Halls and Students Run LA with at-risk youth and completed the Los Angeles Marathon with her.

She is the Owner and CEO of EYEDEAL IMAGE, INC.

Nomination statement by 2013 Latina of Influence Ana Vergara.
I would like to take the time to nominate someone who I consider fits your category for Latina of Influence.  I know how much this award changed my life and I would like to change someone else’s too. This is my first nomination since I received mine in 2013.  I first met her by interviewing her on my radio show.  I knew then she was determined and a hard worker by her list of credentials. But it was not until recently that really made me think twice and realize that I had her all wrong.  She is by far more than just that.  You see, she is battling cancer and still finds the determination to succeed in life.  Cancer has not stopped her from anything.  In this period of time I have seen her still go to her auditions, land major roles, write a book, do public speaking, mentor and give back to the community.