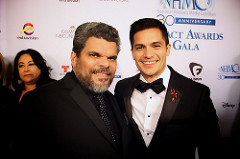 On the evening of Friday, the 26th, the National Hispanic Media Coalition (NHMC) celebrated its 30th year anniversary and honored outstanding contributions to the positive portrayals of Latinos in media at its 19th Annual NHMC Impact Awards Gala at the historic Beverly Wilshire Hotel in Beverly Hills, California. NHMC promoted and passed out brown ribbons as part of #HollywoodBrownout.

“While black Americans received 10 percent of Oscar nominations since 2000, Latinos received 3 percent,” said Alex Nogales, president and CEO of the National Hispanic Media Coalition. The issue of diversity in entertainment can no longer be a black–white dialogue, it has to include Latinos, Asian-Americans, Native Americans, and women. Every community has its creatives and we gather at the Impact Awards to honor ours and inspire more.”

“They didn’t tell our story. They portrayed us,” said special presenter Wilmer Valderrama. He announced the award for Outstanding Performance in Film and Television to Luis Guzmán and stated, “Through decades of film, Luis has given us existence…because of him we live in all those stories. Even in the industry that doesn’t give us those leading roles…It’s not just that we are here to stay, it’s that we have been here for decades.”

In accepting his NHMC award, actor Luis Guzmán spoke about the lack of diversity he would see around him on the set, “The constant question I get is: When is Hollywood going to let Latinos in? I believe that as Latinos we are talented, rich in talent. We are writers, directors, make-up people, sound people. There’s nothing wrong with taking control of the industry–we have the talent, we have the know-how.

On stage to accept her Outstanding Performance in a Television Series award for her role as Xo Villanueva on Jane the Virgin, Andrea Navedo spoke to the audience about a disappointing moment in her career after auditioning with lines for the “girl-next-door” role and getting a call back for the role as the gang leader’s girlfriend instead.

Navedo said, “I feel very honored to accept this award from the NHMC. It is a privilege to go to work every day on a show that represents my Latino culture in a positive light; and it is such a joy knowing that ‘Jane The Virgin’ inspires so many in our community. I act for the love of it and I know that every time I show up to an audition, job, or awards function that I am representing my culture and essentially letting the world know that we matter. And showing up is an important part of the battle.”

East Los High received the award for Outstanding Online Series and Mauricio Mota, executive producer of the show, accepted the award for the series saying, “We are still going through what I call a “Rosita Parks” situation with Latino content both with studios and media: You can be here but please stay in the back of the bus. We want your eyeballs but not your stories. East Los High was created knowing audiences were starving for content that was diverse, edgy, and innovative. It’s a show about English-speaking Latinos, but it relates to audiences everywhere.”

The Lifetime Achievement Award was presented to John Quiñones, anchor of Primetime’s What Would You Do? In his acceptance speech he said, “I grew up in poverty, in the barrios of San Antonio…a kid who used to get punished for speaking Spanish in school. Years later, I got my dream job as a network news correspondent covering Latin America, in large part because I spoke Spanish. The irony was not lost on me. My best stories – the ones that won those seven national Emmy awards – have been stories I’ve been able to tell precisely because I am Latino. That is what diversity is all about.”

Brooklyn Nine-Nine star Stephanie Beatriz received the Outstanding Performance in a Television Series award for her depiction of Detective Rosa Diaz in the Fox comedy series. Beatriz spoke about how the character of the name changed from Megan to Rosa because the show “wanted her to be mulit-faceted and real and Latina just like me.” She added, “Change is happening and it’s happening now. Thank you so much for paving the way for it.”

NHMC presented ESPN with theOutstanding Commitment and Outreach to the Latino Community award. John Kosner, executive vice presidentfor digital and print media at ESPN and Antonietta “Toni” Collins,digital anchor atESPN, accepted the award for the television channel. Kosner stated, “ESPN’s goal is to support the NHMC mission of the media that is ‘fair and inclusive of Latinos’ not only because it is the right thing to do, but because it is more and more important to our business.” John Skipper, president of ESPN Inc. and co-chairman of Disney Media Networks said, “At ESPN we want to be the home for every sports fan and the employer of choice for the best and brightest. This requires an unwavering commitment to diversity and inclusion. It is good for our business and the right thing to do.”

Jackie Guerrido, host of Variety Latino and weather forecaster for Univision Network’s Primer Impacto, and Nicholas Gonzales, star in Resurrection Blvd. and Bordertown, were the evening’s masters of ceremonies. Special presenters included Ivonne Coll, star of Switched at Birth and Jane the Virgin, and Wilmer Valderrama, star of That 70’s Show and El Rey Network’s From Dusk Till Dawn.