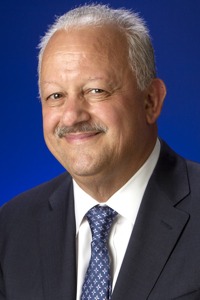 Tomás Morales, president of Cal State San Bernardino, has been named the recipient of the prestigious Alfredo G. de los Santos Distinguished Leadership in Higher Education Award from the American Association of Hispanics in Higher Education.

Morales, who is in his second year of leading CSUSB, will receive the award on Saturday, March 8, during the association’s annual conference, which is being held this year in Costa Mesa.

“To be recognized by your peers is tremendous, but then to receive an award named after one of the great Latino leaders in education is truly humbling,” Morales said. “This is a great honor and I’m very proud to receive it and thankful to the American Association of Hispanics in Higher Education.”

The award, which will also be shared with National Hispanic University Chancellor David López, is given to an outstanding administrator in the field of higher education who has demonstrated excellence in the profession. The award is named in honor of Alfredo G. de los Santos, who over a 40-year career in education served as a librarian, dean, president and vice chancellor at Maricopa County Community Colleges, one of the nation’s largest community college districts.

“We are very proud that you will continue a prestigious line of dedicated champions of higher education who have received this award,” said AAHHE president Loui Olivas.

Morales joined Cal State San Bernardino in 2012 and is the university’s fourth president since it opened its doors in 1965. Prior to coming to CSUSB, he had served as president of the College of Staten Island, The City University of New York (CUNY) beginning in 2007.

In addition to leading Cal State San Bernardino, Morales serves as the chair of the board of the American Association of State Colleges and Universities and as vice chair of the Governing Board of the Hispanic Association of Colleges and Universities, and as a member of the board of directors of the American Council on Education. He previously served on the Executive Committee of the Coalition of Urban and Metropolitan Universities, the American Council on Education’s Commission on Racial and Ethnic Equity, and the National Information and Communication Technology Literacy Policy Council.

He holds a B.A. in history from the SUNY, New Paltz, and earned his M.S. and Ph.D. in educational administration and policy studies from SUNY, Albany.