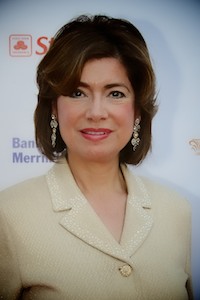 Ms. Contreras-Sweet is the founder of ProAmérica Bank, the first Latino-owned business bank in California in over 30 years. Its focus is small and medium-sized businesses in Latino neighborhoods. So not only did she start small businesses, but those have also been her customers, and she understands all too often that the lack of access to capital means a lack of opportunity.

As Secretary of the California Business, Transportation and Housing Agency, Maria was the driving force behind major job creation and major public investments in infrastructure and in housing.

As a consultant, she helped companies expand into the Latino market. She’s a champion of women-owned and family-owned businesses.

More about Ms. Contreras-Sweet from the web
Maria Contreras-Sweet is the executive chairwoman and founder of ProAmérica Bank, a commercial bank focusing on small to mid-sized businesses with a specialty in the Latino community. Born in Guadalajara, Mexico, Contreras-Sweet immigrated to Los Angeles, California and has since had much success in both private enterprise and public service as the California Secretary of Business, Transportation, and Housing under Governor Gray Davis.