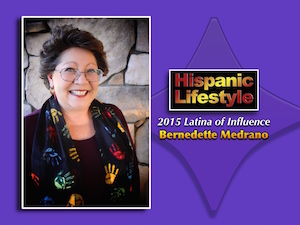 Until her retirement in 2010, Bernedette S. Medrano was the Executive Director of the Santa Ana Education Foundation is a 501(c)(3) non-profit established in the Fall of 1993 to advance meaningful student academic achievement by breaking educational underperformance cycles of Santa Ana students and their families.

Mrs. Medrano was the Advisor for Creating A Path to Success for the California State Hispanic Chambers of Commerce in 2011-2014. It is CAPS’s mission to allow a select group of college students to participate at the CHCC’s Annual Convention and provides participants with practical skills to aid in becoming a successful leader or entrepreneur in their community. Through its program, many lives changed for the better.

Mrs. Medrano was appointed by Governor Schwarzenegger to the Contractor’s State License Board in 2007; and also serves on the Board of Directors of the Vanguard University Foundation. Past boards include: Latino Health Access, MANA de Orange County, and the Delhi Community Center. Mrs. Medrano is a graduate of the United Way of Orange County’s Multi-Cultural Leadership Institute (1999) and the HOPE Leadership Institute (2000).

Mrs. Medrano is the recipient of numerous awards and recognitions including: the State of California Office of the Lieutenant Governor, the California State Assembly; County of Orange, and the City of Santa Ana and was featured in the October 2002 issue of Orange Coast Magazine’s Broadly Speaking .

Mrs. Medrano’s background encompasses over twenty years in Corporate America, in which she was last employed by Hyundai Motor America where she administered over $330 million of Hyundai’s assets.

Among Mrs. Medrano’s many accomplishments, she is most proud of the children she has been able to affect. Mrs. Medrano consciously lives her life, holding the space and believing in others, especially children, until they are strong enough to believe in themselves.

Mrs. Medrano resides in Santa Ana, California and is married to Raul J. Medrano where together they share five daughters and nine grandchildren.