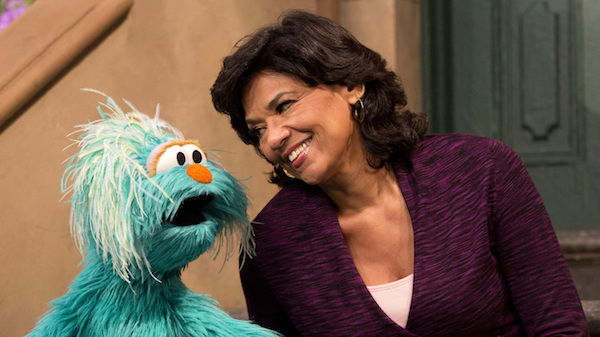 Imagine that for the past 44 years your favorite peeps included a cookie monster, a grouch who lived in a garbage can, a giant yellow bird, and a green frog named Kermit. Welcome to Sonia Manzano’s neighborhood when she was best known as Maria on Sesame Street. The award-winning children’s television writer, actor and author is being honored with the Legacy for Children Award 2017 by Children’s Discovery Museum of San Jose for her contributions to early childhood education. The annual fundraising gala will honor Manzano with this prestigious award on May 19, at 6 p.m. at the McEnery Convention Center. (Event tickets @cdm.org/legacy or at 408-673-2845.)

Sonia Manzano was at the forefront of a media revolution when public broadcasting took a chance with Sesame Street. The now legendary program was a game changer for PBS. It proved that if done well children’s programming could be educational, especially for inner city children – a target audience early on. As a result, Manzano had a profound effect on millions of children who tuned into Sesame Street every day to find a familiar neighborhood and a safe place with Maria, a supportive, reliable, and comforting adult.

Over the years, Sesame Street tackled many sensitive topics from death and incarceration to child abuse. As a trusted adult, one of Manzano’s greatest contributions as Maria was helping children better understand themselves and the world.

“Sonia’s remarkable ability to help children develop social and emotional skills like empathy, compassion and acceptance resonates with the museum’s goals and values as an education center,” said Marilee Jennings, executive director of Children’s Discovery Museum. “Current research shows these soft skills are determinant in children’s future success. Sonia’s work in early childhood education has changed the lives of generations of children and parents, including many of our visitors, and I’m honored to recognize her with the Legacy award.”

Cultural diversity on television was sparse in the ‘70’s and ‘80’s. Manzano was a pioneering trailblazer as one of television’s first leading Latina women in the infancy of children’s educational programming. Her groundbreaking and popular contributions to national television has defined her as an influential role model and helped generations of young people aspire and dream beyond their own neighborhoods.

Manzano has won numerous awards for her writing, acting, and advocacy work for children, including 15 Emmy Awards as a writer for Sesame Street and the distinguished 2016 Daytime Emmy Lifetime Achievement Award. She received the Congressional Hispanic Caucus award, the Bronx Hall of Fame award and the Hispanic Heritage Award for Education. She’s authored four children’s picture books; her most recent is The Lowdown on the High Bridge, published by the Bronx Children’s Museum, A Box Full of Kittens, No Dogs Allowed!, and Miracle on 133rd Street as well as two books for young adults, The Revolution of Evelyn Serrano, and Becoming Maria: Love and Chaos in the South Bronx (her memoir).

The Legacy for Children Award is presented annually in recognition of an individual or organization dedicated to advancing the lives and learning of children. Proceeds from the Legacy for Children Award event supports the museum’s hands-on educational exhibits, in-depth programming, and cultural events, all of which have a strong emphasis on diversity and inclusion, designed to give our community’s children the tools that will help them develop into the talented, creative and diverse workforce of tomorrow.

With over 150 interactive exhibits and programs, Children’s Discovery Museum of San Jose is one of the largest museums of its kind in the nation. Since opening its doors in 1990, the museum has welcomed over 8.3 million visitors and has offered new exhibits each year that respond to children’s diverse educational needs. The striking 52,000 square foot purple building was designed by Mexico City-based architect Ricardo Legorreta and is a beacon of discovery. Encompassing the broad themes of community, connections and creativity, hands-on exhibits invite self-directed, open-ended explorations.  For more information about the Museum, visit www.cdm.org.