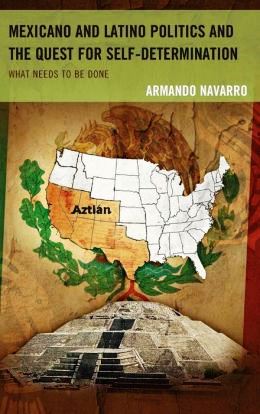 A new book by UC Riverside political scientist Armando Navarro examines the current state of Latino and Mexicano politics in the United States, and outlines models for change that would alter U.S. boundaries and empower a population he contends is politically and economically powerless.

A lecture and book-signing are scheduled

at UCR on Tuesday, May 5, from 6:30 to 8 p.m. in the Tartan and Tweed Room in the Student Services Building. The event is free and open to the public. Parking permits may be obtained at the kiosk on West Campus Drive at the University Avenue entrance to the campus.

Navarro, who teaches in the UCR Department of Ethnic Studies, has authored six other books. His latest book,“Mexicano and Latino Politics and the Quest for Self-determination: What Needs to be Done” (Lexington Books, 2015), argues that:

“Without changing our current condition our Mexicano and Latino communities will in the 21st century be relegated to a politically and economically powerless state,” he writes. Mexicanos are Mexican citizens living in the United States.

Navarro argues that only two alternatives exist to empower Latinos and Mexicanos in the U.S. in this century, and he outlines these change models in his 577-page book. The first calls for the creation of a nation-within-a-nation using the French-speaking Canadian province of Quebec as a template, a model he calls “Aztlán’s Politics of a Nation-Within-a-Nation” and says is likely the most applicable and viable alternative. The second suggests that the region of the Southwest Navarro refers to as Aztlán secede from the U.S. as an independent and sovereign nation-state or be reintegrated with Mexico, a model he calls “Aztlán’s Politics of Separatism.”

“Either model will make the 21st century a ‘brown century’ of great progress and change, not just for Mexicanos and Latinos, but for all the peoples of Aztlán and the country as a whole,” Navarro writes. “While both change models may be perceived by some as being too radical, … both … are change models …, using a working within the law, peaceful/nonviolent electoral, political pressure, and protest approach.”

He also predicts an escalation of economic crises in the U.S. and globally, which he said could “intensify the prospects for war, civil unrest, political instability, food shortages, and capitalism’s deepening contradictions. Global poverty, global inequality, and climate change will reach alarming levels.”

Navarro is “one of the few scholars who know what is to be done to correct the imperfections of a society that prevents Latinos access to education and the political power that is necessary to obtain the human rights we take for granted,” said Rodolfo Acuña, founder of Chicana and Chicano Studies at CSU Northridge who is also regarded as one of the academic fathers of Chicano Studies. “As in his previous works, Navarro draws a bight line under the problems and what is to be done, presenting two change models: one examining the Chicano national question, ‘Aztlán’s Politics of a Nation-Within-a-Nation,’ and ‘Aztlán’s Politics of Separatism’ in which he puts the struggle into a historical context.”