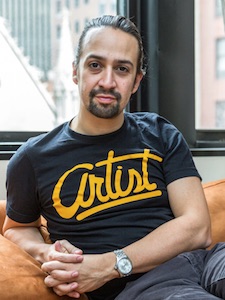 U.S. Programs address issues in the United States, including community and economic development; housing, with a focus on the preservation of affordable rental housing; juvenile justice reform; education, with a focus on digital media and learning; and policy research and analysis on issues such as the implications of an aging society, America’s fiscal future, and the use of economic analysis in policy making.

The entire list can be found on here, https://www.macfound.org

Lin-Manuel Miranda is a composer, lyricist, and performer reimagining American musical theater in works that fuse traditional storytelling with contemporary musical styles and voices. Well-versed in the structure and history of musical theater, Miranda expands its idiom with the aesthetic of popular culture and stories from individuals and communities new to Broadway stages.

In the Heights (2007), which Miranda began to write while in college, is set in Manhattan’s Dominican district, Washington Heights, and expresses the pathos of an immigrant community losing its neighborhood to gentrification and its younger generation to assimilation and upward mobility. In the opening scene, Miranda showcases his linguistic dexterity in the character Usnavi (played by Miranda himself), who interweaves song, dance, and narration to introduce the other various characters. They, in turn, express themselves in musical styles ranging from hip-hop to salsa.

Miranda continues to explore the dramatic potential of hip-hop in Hamilton (2015), in which he uses an urban soundscape to tell the story of Alexander Hamilton’s rise from an orphaned West Indian immigrant to America’s first Treasury Secretary. Miranda presents policy battles, love triangles, and duels through high velocity lyrics, replete with false and slant rhymes, that expand the range of both pop and Broadway music. The daring pairing of street culture with America’s founding narrative recalls the youthful, defiant spirit of the American Revolution, and cross-racial casting connects the present day to the diverse immigrant society of the thirteen rebel colonies. Melding a love of the musical with a pop culture sensibility, Miranda is expanding the conventions of mainstream theater and showcasing the cultural riches of the American urban panorama.

Lin-Manuel Miranda received a B.A. (2002) from Wesleyan University. His other theater credits include co-composer and co-lyricist of Bring It On: The Musical (2011); actor in revivals of tick, tick…BOOM! (2014) and Merrily We Roll Along (2012); new original music for a revival of Working (2012); and the mini-musical, “21 Chump Street,” for This American Life (2014). He is also a member of the improv hip-hop group, Freestyle Love Supreme.

Juan Salgado is a community leader helping immigrants overcome barriers to success in the workplace and build the human capital of their communities. Through the Instituto del Progreso Latino, which he has led since 2001, Salgado works with members of the low-income, Latino immigrant communities on Chicago’s southwest side. Most adults in these communities work in menial jobs and face formidable barriers to upward mobility; few have high school diplomas, and many lack the English-language skills needed for a GED or vocational training program.

Salgado has pioneered an education program that adapts the principles of contextualized learning to equip these workers with the skills that lead to higher-paying employment in manufacturing and health care, sectors with a growing demand for a diverse, multilingual workforce. Participants achieve three goals concurrently: complete an adult basic education, improve language abilities, and acquire job skills. Instituto’s Carreras en Salud program prepares adults for college-level registered nurse programs, meeting a need for bilingual health care; its Manufacturing Technology Bridge program gives workers the high-level skills needed on the modern factory floor. Instituto also provides counseling to identify and overcome other obstacles to employment, such as transportation, child care, and elder care. Salgado has raised funds from private and public sources to expand Instituto’s programs, and he has built strong partnerships with community colleges and business owners to open up further opportunities for participants to gain training and employment.

Salgado continues to broaden Instituto’s reach. In 2010, he opened a charter school, Instituto Health Sciences Career Academy, which offers counseling and support to students beyond graduation through the first two years of postsecondary education or training. Through Salgado’s creative leadership, Instituto is widely recognized as an example of success, and it provides technical assistance to groups replicating its techniques in California, Indiana, Minnesota, and Texas. Salgado has built an effective ladder to opportunity in the Instituto del Progreso Latino, empowering individuals, lifting families out of poverty, and creating a model program with national reach.

Juan Salgado received an A.A. (1989) from Moraine Valley Community College, a B.A. (1991) from Illinois Wesleyan University, and an M.U.P. (1993) from the University of Illinois at Urbana-Champaign. He was programs director of The Resurrection Project, a community development organization in Chicago, prior to becoming CEO of the Instituto del Progreso Latino in 2001.