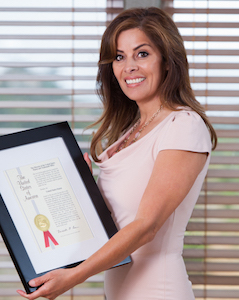 Hispanic Lifestyle is pleased to recognize Frances Prado CEO of Ageless Beautiful Clever Creations, LLC and the inventor of Hanging Secrets as a 2016 Latina of Influence. Ms. Prado along with her fellow Latinas of Influence are invited to participate in Hispanic Lifestyle’s Latina Conference to be held on April 8, 201

6 at the Ontario Airport Hotel, Ontario, CA.  The complete listing of Hispanic Lifestyle’s 2016 Latinas of Influence can be found on Hispaniclifestyle.com

Frances Prado is  the CEO of Ageless Beautiful Clever Creations, LLC and the inventor of Hanging Secrets. She is also a production manager for Costco for the past 22 years.

Born in Bakersfield, California in 1966, she now reside with my family at our ranch in Jamul, California. She is happily married to Leo Prado for more than 32 years and we have two adult children: Leo Jr. is 27 years old and a retired disabled Navy veteran and our daughter Ashley is 24 and majoring in graphic design. In fact, Ashley created our HANGING SECRETS logo.

The proud daughter of Mexican immigrants who began their lives in the United States as field workers armed with nothing except determination…a trait she inherited from them. Things were not easy for my family and at one point we were homeless and living in our car in the fields.

HANGING SECRETS has identified and filled a previously unmet need for the storage of women’s intimate apparel in a convenient and practical way.

The award winning HANGING SECRETS is the world’s first and only patented bra and lingerie organizer. Its ingenious design both showcases and protects your intimate apparel (bras, panties and prosthetics) in a convenient and practical way. The unique bra-shaped transparent cavities allow bras to be stored by style and color while maintaining their intended form. The pockets enable storage of matching panties and/or removable bra straps. It can accommodate up to 12 bras and 24 panties per holder and stores completely out of the way on a standard rod or closet door.

No more endless searching for lingerie! No more jammed and messy drawers! No more crushed bras!

A few years ago she was working my way through the empty nest syndrome and I specifically remember asking myself, “Frances, what are you going to do with all this extra time on your hands? Girl you better start cleaning and organizing around you!” So I started in my bedroom; I opened one drawer and that was it… that was my Aha Moment! What does every woman wear and need? Bras and panties and something to organize and protect them!

I took my idea to the drawing pad and started translating my vision onto paper. After a lot of trial and error, I was finally able to come up with HANGING SECRETS and in December of 2014, I brought my HANGING SECRETS idea to Dr. Melinda Silva for her opinion on the product. Immediately, after reviewing the product, Dr. Silva joined my journey and in January 2015, we formed Ageless Beautiful Clever Creations, LLC.

HANGING SECRETS is all about The Cause. We are committed to supporting organizations that assist breast cancer survivors and we donate a percentage of our sales to the Virginia Ann Scheunemann Memorial Fund, which started in 2003 to assist women who are low income and/or uninsured by providing free products and service.

And I am passionate about my business because it has allowed me the satisfaction of contributing to both the U.S. economy and to women’s charitable causes, which is, for me, the true meaning of living the American Dream.

My Advice to other women:
1) Treat your health like your business. Make it your priority!
2) Be Courageous, step out of your comfort zone, and just get it done.
2) Be Persistent, Passionate, Patient, and always have a positive attitude.
3) Never stop learning, share your knowledge and help others along the way.

Did you know?
“In all of US society, the world of inventors demonstrates one of the greatest imbalances between genders”
In the past women were not allowed equals rights of property ownership ( patents are a form of intellectual property) and many women patented their inventions under their fathers or husband names. Women could not own patents in their own names until 1809

New York Times published an article 2010 Inventing our way out of Joblessness patents have tendency to simulate the US economy. According to their analysis of the data Berkeley patents survey, each issued patent is associated with creating 3 to 10 jobs.