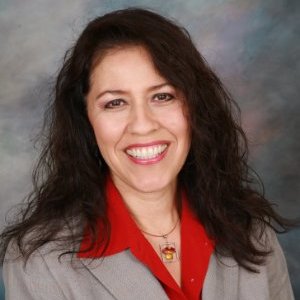 Irma Ramos serves as the Vice Chancellor of Human Resources for the North Orange County Community College District (NOCCCD) where she oversees a diverse workforce of about 5,000 employees at Cypress College, Fullerton College, and the School of Continuing Education.

Irma is the first female and Hispanic to serve in this role as the Vice Chancellor for the District.

Her academic credentials include a bachelor’s degree in Computer Information Systems from DeVry University, a master’s degree in Business Administration from Keller Graduate School of Management, and doctoral work in Higher Education Leadership.

Titles, however, only tell part of the story. It’s no accident that Irma ended up in community colleges. “I remember very clearly,” Irma says, “my mother taking my sister Maria and me when we were young to work in a factory for the summer. She would tell us, ‘This is your life without education.’” Irma’s parents, who immigrated to Los Angeles from Mexico to create a better future for their family, instilled in her and her six siblings a strong work ethic and taught them the value of community. “I don’t think anyone becomes a success on their own. From my first job as a student worker in Financial Aid and Academic Affairs until today, there was always someone who helped me, who pushed me to do what I didn’t think I could do. And those of us who owe a debt to the people who cleared our path must remember that it is now our turn to help others.”

Irma has served on numerous local and statewide organizations, both as a member and in leadership roles, including serving as President of the Association of Chief Human Resources Officers for the California community college system, member of the Community College League of CA Advisory Committee on Legislation, and member of the California Community College Chancellor’s statewide Equal Employment Opportunity/Diversity Advisory Committee. Irma is active in community service and has received numerous awards and honors.

In February 2014, Ramos received the 2014 Award for Progress in Diversity from the Association of California Community College Administrators. Ramos was chosen for her work in enacting much needed changes to Title 5 (Equal Employment Opportunity) Regulations that were approved by the California Community Colleges Board of Governors. “I believe that community colleges are our great resource,” says Irma. “That’s where both of my daughters attend college.  I believe we need to be accessible and truly inclusive: diversity allows us to bring in the best talent and cultivate the best programs.”