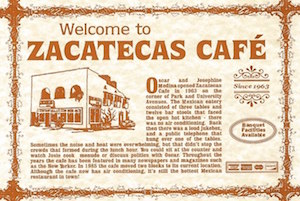 Zacatecas Cafe founded by Oscar & Josephine Medina and now operated by John and Vickie Medina is being recognized as a company that has Survived and Thrived.  Wells Fargo Bank is the presenting sponsor of Hispanic Lifestyle’s 2015 Business Expo and Conference to be held on August 5, 2015 at the Ontario Airport Hotel and Conference Center. Zacatecas Cafe and other Latino Business Owners will be honored during the lunchtime program. Here is the ticket information for our August 5, 2015 event.

Zacatecas Cafe
Oscar & Josephine Medina opened Zacatecas Café in 1963 on the corner of Park and University Avenues. The Mexican eatery consisted of three tables and twelve barstools that faced the open hot kitchen – there was no air conditioning. Back then there was a loud jukebox, and a public telephone that hung over one of the tables.  Sometimes the noise and heat were overwhelming, but that didn’t stop the crowds that formed during the lunch hour. You could sit at the counter and watch Josie cook menudo or discuss politics with Oscar. Throughout the years the café has been featured in many newspapers and magazines. In 1985 the café moved two blocks to it’s current location. It’s still the hottest Mexican restaurant in town! Now 2 towns in 2014 they introduced in the city of Banning Zacatecas Cafe.