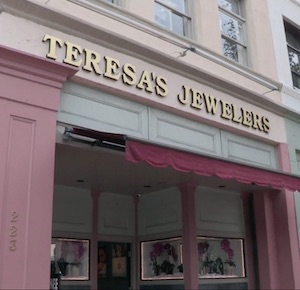 Teresa’s Jewelers founded by Teresa Saldivar in 1985 is being recognized as a company that has Survived and Thrived.  Wells Fargo Bank is the presenting sponsor of Hispanic Lifestyle’s 2015 Business Expo and Conference to be held on August 5, 2015 at the Ontario Airport Hotel and Conference Center. Teresa’s Jewelers and other Latino Business Owners will be honored during the lunchtime program. Here is the ticket information for our August 5, 2015 event.

As a certified gemologist, Teresa can create your custom design for any occasion. Teresa is former President of the California Jewelers Association.

Teresa Saldivar, a Santa Ana native, graduated Santa Ana College and attended California State University at Long Beach. In 1985, after ten years of working in the jewelry industry, Teresa became the first Latina gemologist to own a jewelry store in California. Along with her sister, Patty, Teresa’s Jewelers has been in the same location at the heart of Downtown Santa Ana for 30 years.

For her enthusiastic dedication, as a community leader and for her accomplishments as an entrepreneur, Ms. Saldivar has received several recognitions, which include Small Business of the Year awards from the Orange County Hispanic Chamber of Commerce and Santa Ana Chamber of Commerce.