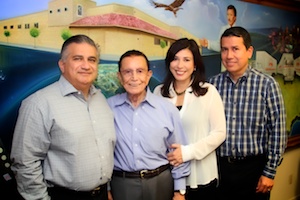 La Reina Inc. and Anita’s Mexican Food owned and operated by the Robles family is being recognized as a company that has Survived and Thrived.  Wells Fargo Bank is the presenting sponsor of Hispanic Lifestyle’s 2014 Business Expo and Conference to be held on August 6, 2014 at the Ontario Airport Hotel and Conference Center.  La Reina Inc. and Anita’s Mexican Food and other Latino Business Owners will be honored during the lunchtime program.

The story of Anita’s is quite frankly, inspirational. The origins of the business date back to 1952, when the patriarch of the Robles family, Mauro, arrived in the U.S. from his native Zacatecas, Mexico to pursue the American Dream. Mauro Robles’ entrepreneurial spirit and insight led to the founding in 1958 of what is now San Bernardino-based Anita’s Mexican Food Corp. What originally began as a flour tortilla manufacturer has grown to become a major flour and corn based food manufacturing wholesaler and co-packer, with more than 1,000 different SKUs under 8 trademarks, including La Reina, Anita’s, La Tolteca, and Old Pueblo Ranch.  It specializes in tortilla and snack foods distributed nationally and internationally to Canada, South Korea, New Zealand, and throughout South America. Many of its co-pack, private label items are sold to retail outlets that include many national, organic, specialty, and club stores.

As a family run business, Anita’s has taken a long-term point-of-view regarding its investments for growth. The Robles siblings have invested time, money and energy in products they believed in even when there was not market acceptance at the time. For example, they were the first company to introduce organic corn tortilla chips in various types of organic corn (i.e. blue, yellow, and white corn). After a national firm flooded the market with their corn tortilla chips, Anita’s demonstrated its capacity to innovate by becoming the first business in the organic, GMO free, and gluten free corn tortilla chip market and expanding the food service side of their business, which now accounts for a considerable portion of their revenues.

The Robles siblings maintain involvement in the community; both Ricardo, the eldest sibling and President of Anita’s Mexican Food Corporation and Rene, his younger brother who is the company’s Vice President, are active parishioners at St. Therese Church and members of the Knights of Columbus. Ricardo is a Foundation Board Member at Santa Marta Hospital and at East Los Angeles Community College, and is Director on the Foundation Board for Alta-Med Health Services, a nonprofit human and health service organization. Jackie, the company’s General Manager, fundraises by running for the Leukemia Lymphoma Society and, since 2009, has served as a board member for the Tortilla Industry Association, of which the company was a founding member.