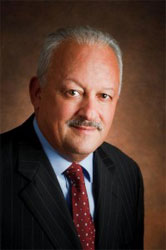 “I am honored to have been selected to serve as the next president of Cal State San Bernardino,” said Morales.  “CSUSB is the foundation of opportunity for students, and I look forward to working with the outstanding, staff, faculty and students as we build on the university’s future together.”

Morales, 58, was among the finalists for the position to succeed retiring President Al Karnig, who has served as CSUSB president since 1997.  He is expected to begin his new position as president later this summer.

From 2001 to 2007, Morales served in various capacities at Cal Poly Pomona, including vice president for student affairs, provost and vice president for academic affairs, professor of education and principal deputy to the president. While at Cal Poly Pomona, he established a University Honors College, realigned the division of academic affairs and played a key role in completing a $23 million expansion of the Student Center.  In addition, Morales helped faculty to secure a $3.5 million National Science Foundation ADVANCE grant to create a university-wide program for the recruitment and development of diverse faculty in the STEM fields.  Morales also served as a principal investigator of a six-year $12 million comprehensive teacher reform grant from the U.S. Department of Education.

Prior to joining Cal Poly, Morales was vice president for student affairs and dean of students at The City College of New York/CUNY from 1994 to 2001.  He provided strategic leadership, restructured the Student Services Corporation, and implemented a new student-centered model for the Division of Student Affairs.  From 1992 to 1994, Morales was assistant dean of the School of Education at SUNY, New Paltz.