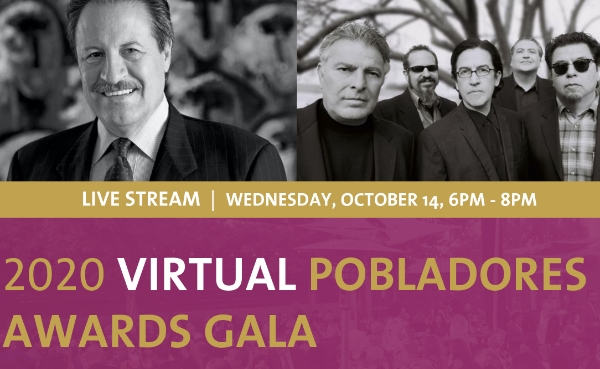 The Pobladores Award recognizes individuals, who much like the original pobladores settlers from Mexico, have blazed a trail that continues to endure, inspire and enrich our community. Cástulo de la Rocha, President and CEO of AltaMed Health Services Corporation and noted patron of Chicano art, and Los Lobos, Chicano Rock Legends are 2020 recipients of the Pobladores Award.

The Annual Gala serves as LA Plaza’s primary fundraising event and supports its many educational workshops, exhibitions and public programming initiatives. Half of all proceeds will be directed to the Eastside Arts Initiative COVID-19 Artists Emergency Relief Fund.

The streaming presentation includes the presentation of the Pobladores Awards, musical performances by Grammy-winning artists Los Lobos and La Marisoul, and musical interludes by Jesús Martinez. Highlights include a retrospective of LA Plaza’s most recent exhibitions and programs, a cocktail demonstration from Madre! Oaxacan Restaurant, the presentation of select items from the Gala’s Silent Auction, and a preview of LA Plaza’s 2021 programming.

“In this challenging year, we cordially invite everyone to join us for a festive night as we honor these giants of East Los for more than 40 years of service in the arts, music and healthcare,” said John Echeveste, CEO, LA Plaza. “Although the event is free to all, we invite viewers to show their support of the important work of LA Plaza by purchasing tickets and supporting our silent auction.”

Those who choose to support the organization by purchasing tickets receive a LA Plaza Membership at the Sepulveda level and a signed print of The Aliso Tree by noted Chicano artist José Lozano. Tax deductible tickets are $125 and are available at: https://lapca.networkforgood.com/events/19981-la-plaza-s-virtual-pobladores-awards-gala.

Supporters can also participate in a silent auction offering a bevy of art and cultural items as well as dynamic experiences. The auction continues until October 17 and can be accessed at: http://32auctions.com/LAPCA2020.  Viewers can also order LA Plaza Special meals from some of the most celebrated Mexican restaurants in Southern California, including Pez Cantina, Madre!, Guelaguetza, and Yuca. Go to https://lapca.org/la-plaza-virtual-awards-dinner-special/ to pre-order a meal.

2020 Honorees:
Cástulo de la Rocha: As President and CEO of AltaMed Health Services Corporation, Cástulo de la Rocha is an enduring trailblazer in community health. Under his visionary leadership, AltaMed has transformed from a storefront barrio clinic in East Los Angeles into the largest Federally Qualified Health Center in California, and among the top five in the nation, with approximately 50 medical, dental and PACE sites staffed by more than 2,800 employees, providing compassionate care to nearly 300,000 patients a year. An avid believer in the healing power of art, de la Rocha has spent 30 years assembling the AltaMed Art Collection. It champions the works of emerging and established artists who reflect the history, achievements, and struggles of underserved communities, and it lives on rotating display across AltaMed’s entire clinic network. De la Rocha has been recognized by the Museum of Latin American Art (MOLAA), and is also a member of the Getty Pacific Standard Time Business Leaders Council.

ABOUT LA PLAZA: LA Plaza de Cultura y Artes celebrates the past and inspires the future by sharing the untold stories about the history, cultures, values, and traditions of Mexicans, Mexican American, and all Latinos in the founding and continuing evolution of Southern California through compelling and culturally enriching exhibitions, educational programs, and public programs.