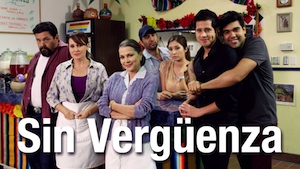 The popular webseries/telenovela  “Sin Verguenza” (Without Shame), created to educate and raise awareness in the Latino community about HIV / AIDS, has been nominated for ‘Best Web Series: Drama’ and ‘Best Web Series: Reality or Informative’ at the Imagen Awards 2013 which will be held on Friday August 16th in Beverly Hills, California.

This innovative web series that is presented as a telenovela soap opera, starring an all Latino cast speaks of a topic that is still taboo in the Latino society, HIV / AIDS.  Through the characters in the series, a family living in East Los Angeles, “Sin Verguenza” informs the audience about the disease, how to prevent it, and encourages the search for treatment and HIV testing. Each member of this family represents a different age range, sexual orientation, and marital status, and shows us how all of them, despite having different lifestyles, are at risk of contracting HIV.  Issues also touch stigma, shame, infidelity, and family secrets as contributors to the risks and continuing spread of HIV.

“Sin Verguenza”, which currently consists of 4 episodes available in both English and Spanish, where released last year on World Day to Fight AIDS as part of an awareness campaign that the nonprofit organization AltaMed Health Systems implemented.  Natalie Sanchez, Hilda Sandoval, and Thomas Siegmeth of AltaMed, creators and executive producers of the series, joined forces with the production company Kavich Reynolds Productions, to make it a reality.

“We are so very proud and excited about the nominations for the Imagen Awards, this opens the door and gives us the opportunity to reach a wider population within the Latino community with our project ” Sin Verguenza ” and our goal is to continue educating and creating awareness among our communities about AIDS prevention, “says the President and CEO of AltaMed, Cástulo de la Rocha.

The series is based on true stories that we have been allowed to share from our very own clinic patients at AltaMed.  It was directed by Paco Farias and includes performances by Eliana Alexander, Daniel Edward Mora, JM Longoria, Joanna Zanella and Maria Richwine. The four episodes of “Sin Verguenza” can be seen on: www.youtube.com / healthsvcs or AltaMeds website: www.altamed.org/hiv .