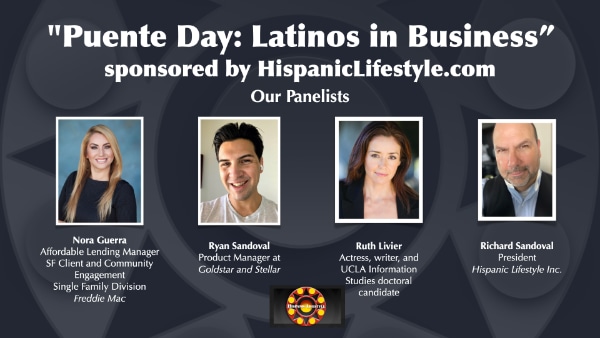 Hispanic Lifestyle is proud to sponsor a Live Stream discussion on Latinos in Business for the Puente Project on Thursday December 3, 2020 on HispanicLifestyle.Com

Participating and providing their perspective are;

Ruth has worked extensively in English and Spanish language media. This includes film, television, on-camera commercials, voice-overs, animation, and theatre. Among her on-camera work, she starred in the groundbreaking Showtime series Resurrection Blvd., recurred in Beverly Hills 90210, she’s been directed by Sam Raimi in Drag Me to Hell, and by the iconic Franco Zeffirelli at Rome’s Cinecittá Studios. Her voice credits include Pixar’s Golden Globe and Oscar-winning Coco (dir: Lee Unkrich), playing Lolita opposite Val Kilmer’s Zorro in the 2012 GRAMMY nominee The Mark of Zorro, recurring in Disney’s Elena of Avalor, starring in the Fwak! animated feature Los Campeones de la Lucha Libre, and videogames including Sly Cooper 3.

Ryan Sandoval is a Product Manager with Goldstar and Stellar and resides in Claremont, Calif. Received his undergraduate degree in Communications and Political Science at California State University of Fullerton, where he achieved a 3.7 GPA, listed on the Dean’s List every quarter and inducted as a member of The National Political Science Honor Society. Recently, he was accepted to the Peter Drucker School of Business Management at Claremont Graduate University.

For the last decade, his career has included working with companies in varying sizes: small ($500k), medium ($50M), and Enterprise level ($5B). They’ve also covered areas of regional, domestic, and international consumers. The vast majority of the roles focused on Product and Marketing – largely identifying and solving customers’ needs by building digital products with various resources both internal and with external agency partners.

Our host from the Puente Project
Josefina Canchola
Josefina is currently The Associate Director of Partnerships for The University of California, Berkeley’s Puente Project (Center for Educational Partnerships). She has two biological children; Julia (16) and Darryl Antonio (10) and is also raising her grand-niece Eliana who is two years old. During her free time, Josefina enjoys writing and has had a number of her poems published in various Latino Literary journals.