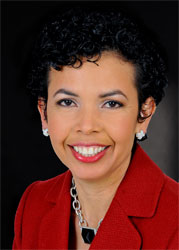 Flora M. Castillo became the 2012-2013 Chair of the American Public Transportation Association (APTA), officially assuming the office at the start of the APTA Annual Meeting on October 1 in Seattle, WA.  Castillo is APTA’s first Latina chair. Castillo is a member of the NJ TRANSIT Board of Directors, having been appointed by the governor to the NJ TRANSIT Board in 1999, and reappointed by three governors.  She also serves as the Vice President of Corporate Public Relations at AmeriHealth Mercy Family of Companies (AMFC), one of the largest Medicaid Health Plans in the United States.

“Public transit was something that my family depended on in El Salvador and the United States,” said Castillo. “I know firsthand the value of public transportation and how important it is to those who need it most. That’s why my theme for the year will be ‘Public Transportation: It’s All About the People’.”

Noting that she is passionate about the employees that keep public transit services operating, Castillo said, “My experience on the New Jersey Transit Board has given me exposure to all aspects of the public transportation industry, and it has given me deep respect for the dedicated women and men who provide these services.”

As Castillo added a personal note in her inaugural remarks, “As the first Latina chair, I have such a sense of pride, because this tells people who look like me that this is an industry that has a place for them and other minorities around the country.”