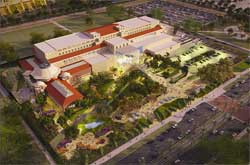 Urban Habitats Designed as Part of Institution-Wide Transformation  Makes NHM an Indoor- Outdoor Museum Unlike Any in the U.S.

The Natural History Museum of Los Angeles County (NHM) today opened for limited prototype use the first two elements of its 3½-acre North Campus, the long-awaited urban nature experience that will serve as a new front yard for the Museum and a new outdoor destination in the heart of Los Angeles. The Home Garden, where visitors and school groups will learn to plant their own gardens, and the 1913 Garden, featuring flowers and pollinators blooming year-round, are the beginnings of a beautiful and engaging North Campus “living laboratory” that has been planted in its entirety as of April 2012, and is taking root to open in full as part of the Museum’s centennial celebrations in June 2013.

North Campus will increase the programming area of the Museum by 50 percent and give visitors the opportunity to deepen their understanding of the natural world before walking through the Museum’s doors. It will serve as a main entrance for the public, connecting with two new MetroLink Expo Line stops on the east and west sides of the Museum, and creating an extraordinary destination and resource for Angelenos and visitors to Los Angeles.

North Campus is the first outdoor expression of the Museum’s master plan, an historic transformation of public spaces and visitor experiences leading up to the centennial. Inside, the metamorphosis has included renovations and seismic retrofitting to the 1913 Building (the Museum’s original home) and the adjacent 1920s Building, the development of five new permanent exhibitions, a new traveling exhibit gallery, and a slate of new visitor amenities including a renovated store and café—all told, almost half the Museum’s public space. This project is funded in part by the County of Los Angeles, the California Department of Parks and Recreation Nature Education Facilities program, and other individual and institutional donors. To date, the Museum has raised $105 million in its NHM Next campaign, 78% of its $135-million goal.

Outside, the master plan includes the creation of the Otis Booth Pavilion—the new main entrance to the Museum, and the visual centerpiece of North Campus—a new car park and the interactive outdoor exhibits of North Campus. With habitats of butterflies, birds, bugs and plants, the outdoor exhibits will be places where Angelenos partner with Museum scientists on citizen science projects while discovering and enjoying the rich diversity of life that flourishes all around.

It is a “performative” landscape on all levels. The plants are carefully selected and planted to enhance and foster biodiversity, a relationship to fauna. The decomposed granite pathways are permeable, along with the seasonal stream—and there bioswales to catch onsite storm water.   Reclaimed lumber from a fire-damaged County building was used for the construction of the Home Garden raised beds and benches; left over roof tiles were re-purposed as garden curbing. Outdoor lighting is minimal and when installed dark sky compliant to work with the cadence of night life.  What once was an asphalt sea of parking has been transformed into living space extending the exhibit within the Museum to a living laboratory outside.

“North Campus is a major part of the historic metamorphosis taking place at NHM,” said Dr. Jane Pisano, president and director of the Museum. “We are entering a new dimension of programming, extending the visitor experience from an incredible collection of natural specimens inside to an outdoor space where plants and animals can be interpreted in a living context. We have always made connections to the natural world, but now we are connecting with nature in a direct way for our visitors. It is a dramatic new way for us to apply the mission ‘to inspire wonder, discovery, and responsibility for our natural and cultural worlds.’”

The North Campus Team
The North Campus is being developed by a unique collaboration of architects and designers guided by the Museum’s dynamic scientists, educators, and program staff to create an environment for enjoyment, observation and learning.

“This is a new kind of garden space, an urban ecological laboratory where people can learn and have a better understanding of nature within the city,” Lehrer said. “Nature is not just in our national parks, it is all around us. A better understanding of urban nature will foster an appreciation and stewardship of our natural world in the areas that we inhabit most. Mia Lehrer + Associates is very excited to have been an integral part of the creation of this garden with an institution that is positioned to provide this stewardship and education.”

A Living Laboratory
The city’s existing wildlife might surprise Angelenos. Los Angeles is the “birdiest” county in the U.S., for instance, home to more species than any other locale. Ornithology Collections Manager Kimball Garrett has a growing list of 168 different species sighted in Exposition Park over the past few decades and expects North Campus’s trees and bird feeders to be quickly populated.

To attract and sustain that wildlife, one of the guiding principles to the North Campus was performative plants—flora that not only are aesthetically pleasing but offer wildlife places to eat, sleep, give birth and hide. The plan is working: Garrett reports prodigious numbers of birds at the feeders. There are butterflies and nectar-feeding birds fluttering throughout the grounds, and hidden cameras are capturing films of opossums, squirrels, birds and owls. This footage, much of which is described now at northcampusnhm.blogspot.com, will be viewable inside the North Campus’s indoor component, the Nature Lab.

With this wildlife present, the North Campus can become an active field site for science, where NHM visitors partner with Museum scientists and educators. Together, they will identify and track plants and animals and, as NHM curators promise, discover animal species that are new to science. The science experience won’t end when visitors leave the Museum, however. Wildlife inventories will begin at North Campus, and then extend across Los Angeles, as the Museum’s citizen science projects will include school outreach and field trips. Museum staff will post images of species, social media submissions, experiment results, and surveys on photo walls onsite in the Nature Lab and online.

NHM has been building its community science programs for many years, with wide-ranging discoveries and participation (detailed information at nhm.org/site/research-collections/community-science). Now in its tenth year, the Spider Survey has documented the fauna of houses and backyards of L.A., and discovered the first documented brown widows in the city. In the Lost Lizards of Los Angeles Project (LLOLA), Museum scientists—perplexed by the lack of lizards in Exposition Park—asked the people of Los Angeles to help document lizard presence (and that of other reptiles and amphibians) in their backyards, parks and schoolyards. The project’s first notable discovery came last year: a population of non-native Mediterranean House Geckos (Hemidactylus turcicus) in the Chatsworth region.

The East Side: Urban Wilderness and Beyond
The eastern portion of North Campus consists of varying microclimates and diversified habitats. From the Urban Wilderness to the Home Garden, these environments offer both contemplative spaces and learning-based exploration.

NHM Next
The completed renovation of the Natural History Museum’s Beaux-Arts 1913 Building sets the stage for the NHM’s rollout of new visitor experiences leading up to its centennial in 2013. The milestone re-opening of the 1913 Building began in Summer 2010 with new exhibitions inside its iconic rotunda and Age of Mammals. In July of 2011, NHM opened its new Dinosaur Hall. Becoming Los Angeles, an exhibition focusing on how environment and people affected one another as Los Angeles transformed from remote pueblo to regional metropolis, opens in late 2012. In 2013, the year of NHM’s 100th anniversary, 3½ acres of nature experiences and their indoor component, the Nature Lab, as well as the new Otis Booth Pavilion, debut.

About the Museum
The Natural History Museum of Los Angeles County is located at 900 Exposition Blvd., Los Angeles. It is open daily 9:30 am to 5 pm. The Museum was the first dedicated museum building in Los Angeles, opening its doors in 1913. It has amassed one of the world’s most extensive and valuable collections of natural and cultural history—with more than 35 million objects, some as old as 4.5 billion years. The Natural History Family of Museums includes the NHM, the Page Museum at the La Brea Tar Pits (Hancock Park/Mid-Wilshire), and the William S. Hart Park and Museum (Newhall, California).