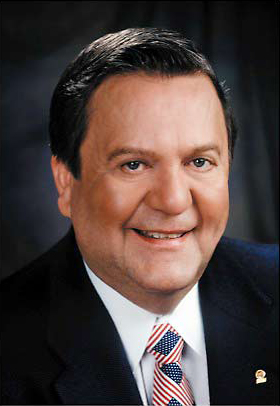 It is with a heavy heart that Stater Bros. Markets announces the passing of “Our Jack”. Surrounded by his entire family, Jack H. Brown passed away on November 13, 2016 at 10:45 p.m.

A native of San Bernardino, California, Brown began his Supermarket career as a box boy at Berk’s Market Spot in San Bernardino at the age of thirteen (13), sparking a sixty-five (65) year career in the grocery industry. Brown was passionate about the supermarket industry. He loved his “Family” of Employees and the loyal Stater Bros. customers who he proudly served since taking the helm of Stater Bros. Markets.

“Grief is not a strong enough word to describe what the Stater Bros. ‘Family’ feels,” stated Stater Bros. President and CEO Pete Van Helden. “Jack touched every one of us in a very personal way, and it is that legacy that we must carry forward. He loved the business, his company and each one of us,” Van Helden continued.

Brown was a proud Navy Veteran who served on active duty with the Pacific Fleet of the United States Navy during the Vietnam era. Brown’s support of the military and our nation’s veterans remains unparalleled.

In 2004, he received the “Friend of the Veteran Award” from the Riverside National Cemetery’s Veterans’ Advisory Committee for his continued support of volunteer services to Veterans and their families. Brown also received the “Patriot Award” in 2011, the highest award the Congressional Medal of Honor Society can bestow upon an individual.

In addition, Jack was one of ten Distinguished Americans to receive the 1992 “Horatio Alger Award” in Washington, D.C., in recognition of his outstanding contributions to America and the “American Dream.”

Brown has received countless awards for his contributions to the supermarket industry. In 2001, Brown received the California Grocers Association “Hall of Achievement Award” for a lifetime of dedication to the Grocery Industry, and in 2005, he received the prestigious “Sidney R. Rabb Award”, the Supermarket Industry’s highest award.

Brown has been recognized for his generosity in giving back to the “valued” communities he loved and so proudly served. In 2008, he established Stater Bros. Charities, the philanthropic arm of Stater Bros. Markets as a way to give back in a larger way. Brown was a founder of the Boys and Girls Club of San Bernardino, and the Founding Chairman of Children’s Fund of San Bernardino County.

His burial will be private for family only with a memorial to follow at a later date.

Richard Sandoval’s note | A conversation I had with Former Mayor of San Bernardino Judith Valles indicated that Jack Brown’s mother Rose Brown was of Mexican decent. Ms. Valles grew up with Jack Brown in San Bernardino, California. I once had the opportunity to mention this conversation to Mr. Brown and he referred to Judith as his “Homegirl”.