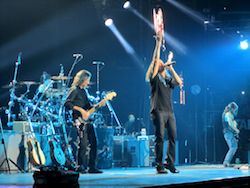 Billboard magazine has heralded Maná as “the most widely sold and heard Latin band in the world”. Having formed in Guadalajara, Mexico in 1986, the quartet of Fher Olvera, Alex González’ Sergio Vallín and Juan Calleros have gone on to be global ambassadors for the Latin Rock genre, while selling over 30 million albums.  To date, Maná has been recognized by their musical peers with four GRAMMY and seven LATIN GRAMMY Awards.

On Sunday, September 30, President Obama will deliver remarks at a grassroots event at Desert Pines High School in Las Vegas, where he will encourage Nevadans to register to vote by the October 6th online voter registration deadline and to start voting on October 20th, the date early voting begins in Nevada.

Grammy Award winners Maná will perform at the grassroots event on Sunday.

Maná was most recently in Las Vegas earlier this month celebrating Mexican Independence. This is the group’s first performance for President Obama’s re-election campaign.