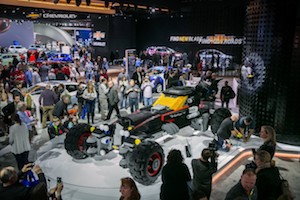 Chevrolet, along with students from Detroit’s Cody Rouge community, A World in Motion and FIRST LEGO® League, unveiled its life-size LEGO® Batmobile today at the North American International Auto Show. Leslie Campos a 5th grade student and a member of the Mercy Education Project’s FIRST LEGO League team, participated at the event along with Paul Edwards, U.S. vice president of Chevrolet Marketing.

Measuring 17-feet long and featuring exclusive stud shooters, the LEGO® Batmobile from Chevrolet was designed to strike fear in the heart of any villain. The vehicle was inspired by Batman’s Speedwagon featured in “The LEGO® Batman Movie,” which hits U.S. theaters on Feb. 10.

In this exciting new animated LEGO® adventure, Batman, DC’s iconic Super Hero who famously prefers to work alone, must learn to cooperate and connect with others to save Gotham City from The Joker.

“To work on the LEGO® Batmobile with Warner Bros. is an absolute thrill for us at Chevy,” said Paul Edwards, U.S. vice president of Chevrolet Marketing. “Many of the themes in ‘The LEGO®Batman Movie,’ like imagination, family and community, align perfectly with our Chevy brand values and add to the value of the partnership.”

The LEGO® Batmobile from Chevrolet will also appear in the next variation of Chevrolet’s “Real People, Not Actors” campaign. In the new spot, real LEGO® Minifigure™ figurines discuss what kind of person would drive the all-new LEGO® Batmobile.

To learn more about all the exciting options available on the LEGO® Batmobile, please visit Chevrolet.com.